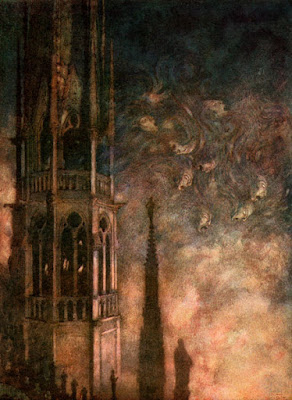 This might be the last or second-to-last update I make about this, since I have good news! Supplement 🜏: Lost Carcosa is nearly finished!

The most recent iteration of the document is 64 pages long, but the finished product should be 70-75 pages long.

Here is a list of what is currently featured: 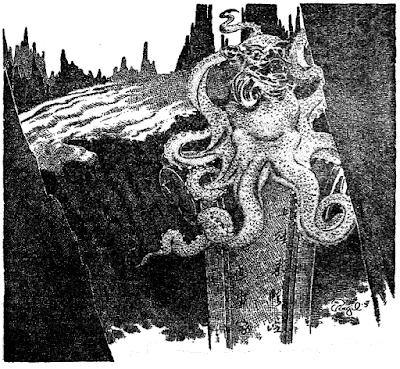 By the time the supplement is finished, it will also feature:
Hopefully I'll have a draft done in a few days, after which I'll do some testing and revise it. After that, I'll be putting it up for sale on DrivethruRPG.

Thank you all so much for your advice and support, and I hope you will enjoy reading and using Lost Carcosa as much I did making it!
Posted by Tristan Tanner at 4:25 AM 4 comments:

What Do YOU Want From Lost Carcosa? 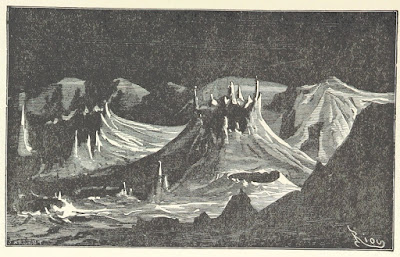 I'd say I'm about 70% done maybe with Supplement 🜏: Lost Carcosa, and I want input as to what I'm going to focus on the most. Progress has slowed a bit as I've gotten somewhat more ambitious than previously expected. My original estimate for the length of the supplement was 60 pages, now I imagine it is likely to be a little bit larger than that.

Progress is also slow because I keep reading and rereading my sources of inspiration to make sure I get the tone I want and that I'm in the right head-space.

Also, I realized I wasn't clear about this, but this will be likely sold on DrivethruRPG for 4.99.

Currently, what I have left to work on is as follows:

Anyway, I want to know what y'all think are the most important things I should focus on, and so I've put together a little strawpoll below:

Thank you for reading! 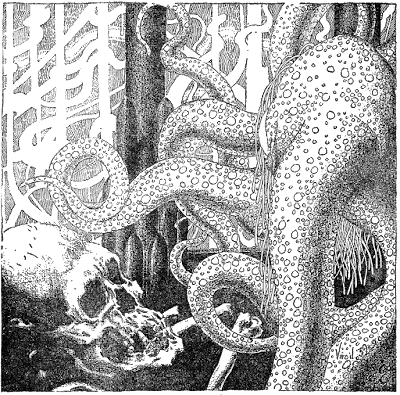 The following is a work in progress excerpt from my upcoming supplement, Lost Carcosa.

THE YELLOW DESERT OF ROTAN
Vast dunes of powdery yellow sand go on for miles, broken by the ruins of long dead civilizations. Rotan is a land of death and bleached bone, inhabited by monsters and the ferocious green men of Barsoom. Scholars say that here is where the King in Yellow first came to Aldebaran, transforming the sands a sickly yellow color and breaking down the barriers between worlds. Wanderers in Rotan seldom survive this harsh environment if they come unprepared; the landscape seems to shift and warp to lead travelers to their doom.

The Black Pyramid: Towering high into the sky, the twin suns of Aldebaran shining off its reflective obsidian surface, the Black Pyramid is a truly awe inspiring sight. Cultists devoted to the Crawling Chaos come from far and wide to worship at this place. Those few who enter the pyramid and return alive claim that it is larger on the inside than seems possible, seeming more like a vast city than a single building. They tell stories of horrible abominations that thirst for human blood, but also of vast troves of treasure, all contained within endless winding corridors and oddly angled rooms. Some believe that if you reach the center of the pyramid alive, you are granted an audience with Nyarlathotep himself. 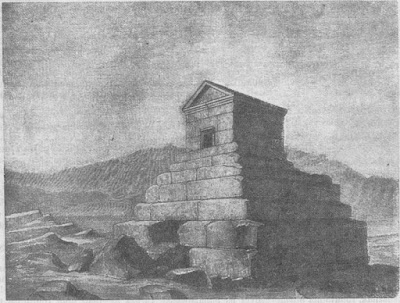 50 THINGS TO FIND IN ROTAN

I am making great progress towards the completion of the Lost Carcosa supplement. Currently I have completed the Men and Magic section of Supplement 🜏, and I'm almost complete with the Monsters and Treasure section.

After these portions are completed, I will begin work on what I hope will be the most interesting and useful section of the book: Adventures in Carcosa.

I have come up with 6 regions of Carcosa, and each of these will have a table of 50 possible locations/things to find while exploring those regions (somewhat similar to the "Lay of the Land" tables in Hubris). These regions are:

In addition to the 50 random features of each region, each region also has at least one more detailed area, and I will also be writing some encounter tables.

I will also be detailing the various gods of Carcosa, which are not limited to the Great Old Ones, though they of course have prominent placement.

At a rough estimate I'd say the finished product should be around 60 pages, but keep in mind I'm not very good at estimates.

Also, in unrelated news, I've updated Adventures in Distressingly Hazardous Dungeons to include some slightly modified wilderness travel rules which are somewhat closer to the OD&D rules.

This updated version can be found here.
Posted by Tristan Tanner at 2:57 PM 3 comments: 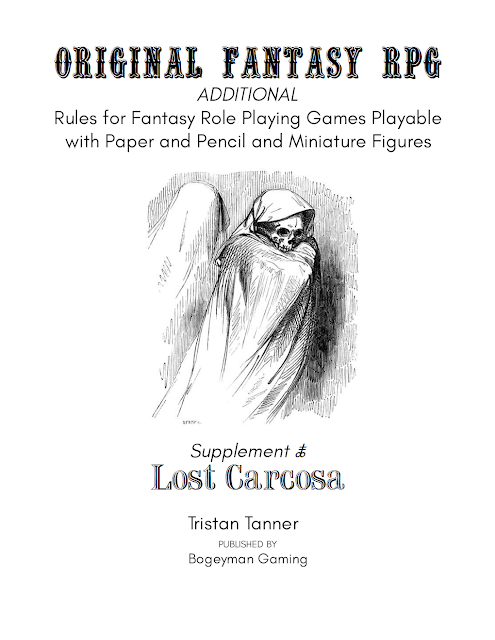 That's all for now folks! Sorry for the dry spell of posts.
Posted by Tristan Tanner at 2:44 AM 6 comments:

There is some gross/gory stuff on this post, so I'm putting it behind a jump break.

The Kingdom of Blackwood 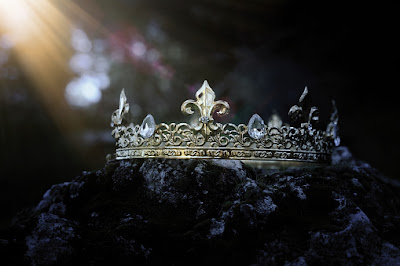 It has been a hot minute since I've posted to this blog, so I decided to put up a summary of the kingdom of Blackwood from my home setting.

1. What is the government like here?
Blackwood is ruled by a monarch, a ruler with supreme authority over the whole nation. Monarchs are selected by completing quests that are determined by the Questing Crown, a sentient magic item. Depending on how much the Questing Crown likes the current ruler, the quests will be relatively easy or extremely difficult. The Questing Crown’s quest is broadcast in the dreams of everyone in Blackwood.

2. What are the people like here?
The people of Blackwood are extremely tolerant, as anyone can become the monarch of Blackwood regardless of ethnicity, species, gender, or sexuality, so long as they are able to complete the quest assigned by the Questing Crown. People of all sorts live in Blackwood, and there is no dominant ethnicity.

3. What religious beliefs do people follow here?
All religions are tolerated in Blackwood, so long as they do not explicitly call for violence. Churches and temples of countless faiths can be found throughout the land, including missionaries from Norenlund attempting to “save the heathens”.

4. What are some notable cities/settlements?
The capital city of Pinehaven is located deep in the heart of Blackwood. It is the location of Blackwood castle, the reigning monarch’s home. Far to the north of Pinehaven is Rimebridge, a relatively large city known for its frigid cold and the many ancient ruins nearby. In addition to these two settlements, there are numerous small towns and villages scattered throughout the nation.

5. Who are some noteworthy people who live here?
The current reigning monarch is Queen Julia, an extremely strong warrior from northern Blackwood. She has short black hair, dark skin, and piercing brown eyes that seem to gaze into the soul. Julia is stoic, but compassionate, and slew a foul vampire for her quest in order to become monarch. She wants to do what is best for Blackwood. The monarch who was in control before Julia took over was Elric Quickfingers, a former thief who stabbed his companions in the back to obtain an ancient tome of magic, the quest assigned at the time. He is vengeful and wants his throne back, and is willing to hire other adventurers to do the dirty work, so long as he completes the quest.

6. What goods are available to purchase here?
Magical items, while not as bizarrely plentiful as in Arcturon, is more common than in other parts of Visterra. The occasional magic shop can be found, mostly in larger cities though. Blackwoodish armor and weapons tend to be good quality, though not necessarily the most technologically advanced. Some gunsmiths exist, but they aren’t very common.

7. What unusual laws are there which PCs should be aware of?
The one unusual law of Blackwood is its method for choosing monarchs. Other than that, laws are fairly standard.

8. What kind of adventures can be had here?
There are many old ruins and caves inhabited by monsters to be slain throughout Blackwood, and always there is a quest broadcast in the dreams of the nation’s inhabitants.

9. What is the environment like?
Blackwood is, as its name suggests, mostly forested, with trees sometimes reaching hundreds of feet tall. Most settlements are nestled in clearings, sometimes hand-made by loggers. In addition, there are some marshes and areas of hilly grassland.

10. What is a brief history of this place?
Blackwood is a very old country, with a history dating back thousands of years. Huge volumes compiling the exploits and laws of its many rulers fill entire library shelves. Famously, however, the first king of Blackwood was named Elwin, a sorcerer who bound his soul to the Questing Crown after he died, so that he could retain some modicum of control over the nation forevermore.

Posted by Tristan Tanner at 4:57 AM No comments: