28. What's a really cool imaginary place you've made up? Draw a map of it. Don't worry it's just a map. E'rybody can make maps. 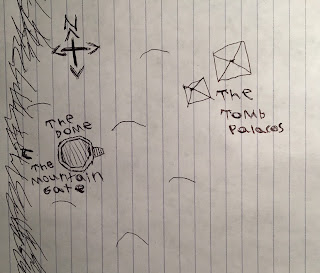 Screw it I made a map of a place completely improvised based on some ideas I had lying around.

This is the Howling Desert, so named due to the fact that there are harsh winds here. Because magic is a thing and wizards are godawful, these winds are even worse than normally possible, and contain air elementals.

The Dome is the only major settlement here. Its a giant octagonal thing made from glass and steel, and it contains an oasis within. Within the dome is a nearly tropical environment, with arboreal houses, though there are also extensive mines beneath the artificial forest floor.

The Mountain Gate leads into the mountains, and leads down into an endless stairwell that nobody has returned from. It is said that Fyreiclau, an ancient and powerful dragon, descended the stairwell and eats any who try to reach the bottom.

The Tomb Palaces are two enormous 4 sided pyramids full of living statues, mummified corpses, and bound demons. They were built for an ancient matriarchal society of sorceresses. The Big Palace contains the mummy last queen of the society, before they moved to a more democratic system of government and also royally screwed over the environment with magic. The Small Palace contains the mummies of her dozen husbands.