This is rapidly becoming less of a RPG a day thing as it is an RPG every 3 days thing, but who is keeping score anyhow?

14. Roll a d20 and count down that many photos on flickr.com/explore. Thats your prompt. 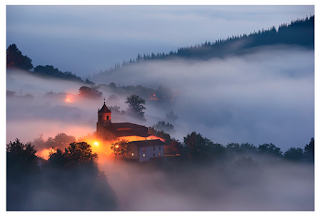 So the first thing this picture made me think was "Silent Hill But Its In The Woods" and honestly thats just such a good concept I'm gonna roll with it, and write up 3 monsters that would show up in this setting:

These things look vaguely like the outline of a woman, but thats where the resemblance ends. They have no actual limbs, what looks like legs and arms are merely protrusions from their flesh, fused to their body. Their fingers trail and branch off like roots, forming tentacles an inch thick covered in thorns that propel it forward.

The monster's face is the worst. It is the highly detailed visage of a beautiful lady carved into its stiff flesh, and sap-like blood oozes from the lines. The face never changes, even as the beast's thorns stab into you.

At first you think its an owl but no, owls are feathered and cute. But this? This thing is fleshy and wet and looks like someone covered a baby in too much skin before extruding wing-like flaps of flesh out of its head.

It has two enormous piercing eyes that glow a pale blue, and has foot long talons.

If you are in the vision of a Fake Owl you are in bright light and everyone can see you.

Theres a kind of material called Vantablack that absorbs 99 point something percent of visible light. If you paint something with this material, it becomes a silhouette, wrinkles on foil disappear from sight. It looks like you're staring into the void. Thats what looking at the Big Bad Wolf is like.

At a glance it looks canine, but the longer you look at this unearthly black mass the more wrong it looks. The muzzle is too long, the skeletal structure is all wrong, and you swear you've never seen a wolf with a tail that thin. The Big Bad Wolf never makes noise, unless it is about to attack, in which case it emits a terrifying sonic screech that is so loud it physically hurts.

15. Write a pitch for how you'd change a shitty game into a good game.

4e but you're all demigods. Why does the warrior get weird special abilities that don't make sense? Because he's the son of Ares and he's phoning his dad for help.

Theres already a crap ton of mythological beings in the monster manuals, just grab them and go. Maybe XP is their life energy or something, I dunno.

Anyway I'll post more soonish I still need to write a session report for my last playtest.
Posted by Tristan Tanner at 4:55 PM