The Colour out of space is not so much a monster as it is a phenomena. These beings are a living hue, descending from the stars on meteorites. Upon arriving, the Colour begins to sap all life from an area, usually about the size of a 6 mile wide hex. Creatures born in the influence of the Colour will be mutated, and their flesh provides no nourishment. Every week spent in a hex infested by Colour, creatures must make a saving throw versus poison. If failed, 1 point is subtracted from Strength, Wisdom, Charisma, Constitution, and Dexterity (most humanoids have 10 in each of these attributes). When a creature’s Constitution is reduced to 0, it either dies, crumbling into ashes, or becomes an undead creature equivalent to a skeleton. The Colour cannot be killed, though it may be possible to dispel it with the right rituals. Colours tend to infect a land for 1d6 years before ascending into space, leaving an “offspring” behind which will start the process again in 1d4 decades.

The Colour can also gather its essence into a semi-material form, shaped like a glowing mist, to directly attack its victims. Anyone hit by the Colour loses a level. If this would result in a character being reduced to 0 levels, they instantly die and become undead equivalent to skeletons under the control of the Colour.

The Old Ones are half-vegetable and half-animal, resembling 5 sided barrels with starfish heads, tentacles, and 5 membranous wings. They are extremely intelligent, possessing 5 lobed brains instead of humanity’s two. The Old Ones’ civilization collapsed long ago due to unknown reasons, though it is known that the Shoggoths may have been involved, and as such most Old Ones that will be encountered are long dead. However, the Old Ones are capable of faking death, and hibernating for millions of years, and so it is possible to find living Old Ones sleeping in their cyclopean tomb cities. The Old Ones speak in a flute-like piping language, most commonly described as sounding like “Tekeli-li”. Shoggoths are horrifying creatures, hideous masses of black, primordial ooze covered with eyes and mouths that constantly dissolve and reform. Their variable attacks represents them growing and consuming pseudopods rapidly. Most shoggoths are at least 10 meters in diameter, but they can hypothetically be almost any size. They were originally created by the Old Ones long ago as a slave race, before they evolved into conscious entities and rebelled. Shoggoths speak in the strange piping language of their former masters, and will always attack Old Ones on sight. 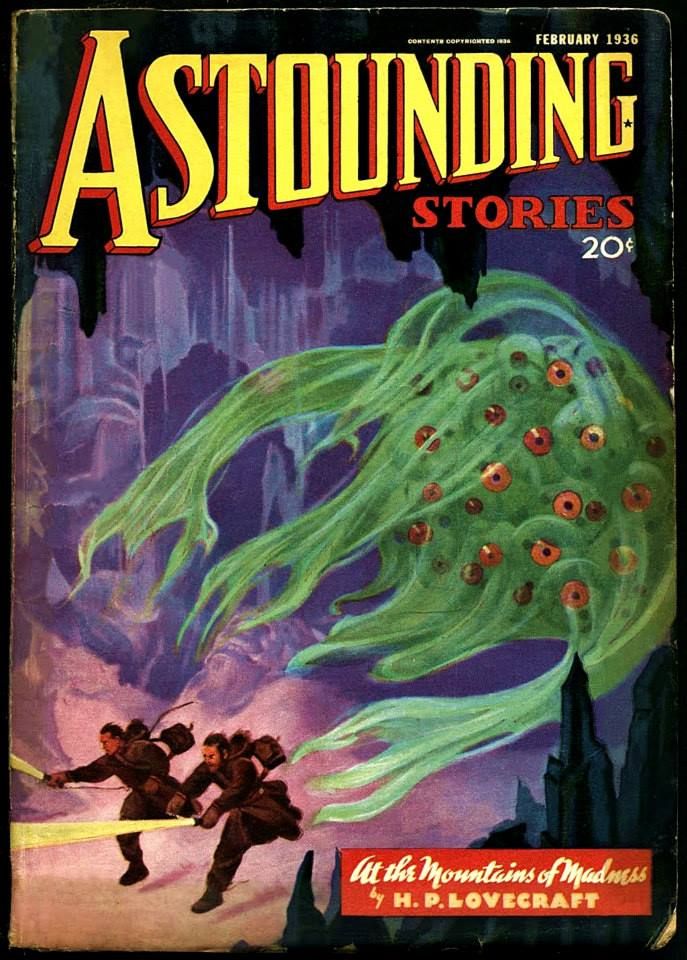 Though the Mi-Go look like large crabs with bat-like wings, they are actually closer to a bizarre kind of fungi, hinted at by their strange fleshy heads covered in antennae. The Mi-Go only partially exist in our reality, being composed of utterly alien matter. As such, they only take half damage from non-magical weapons, though they can still be killed. The Mi-Go do not experience grief like humans do, and as such it is still possible to bargain and parley with them even after having previously killed many of their number. Mi-Go are technologically advanced, and normally have some form of mechanical translator which allows them to speak and understand any language. After generations of living in the warm, dark ruins beneath the cities of the Old Ones, these penguins have grown to massive size and lost their eyes. They tend to be peaceful creatures, but may attempt to defend themselves if attacked by startled adventurers mistaking them for monsters.


The dark young are servants of Shub-Niggurath, an evil fertility deity that is also known as the Black Goat. These creatures appear to be related to shoggoths, and it is possible that they are a hybrid species caused by Shub-Niggurath breeding with a shoggoth. Dark Young resemble trees made from ropy tentacles covered with mouths, with roots ending in goat-like hooves. They are usually worshiped as nature spirits by certain orders of evil druids. (Image taken from The Days of Chivalry, or the Legend of Croquemitaine)

Posted by Tristan Tanner at 8:24 PM