Later editions of D&D added a couple more aberrations (discount Lovecraft monsters), and the Balhanoth, while somewhat generic, makes for a good old school monster in my opinion. I think it would work well patrolling the depths of the Tower of Zenopus. Note that while the Balhanoth first appeared in the 3.5 edition, the version I'm converting came from 4e. 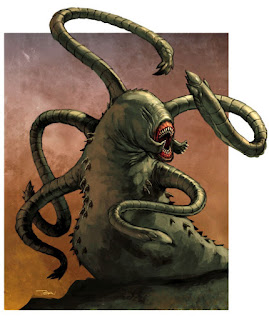 The Balhanoth is a terrifying and alien creature from the deepest depths of the underworld. While at first glance it may appear to be nothing more than a brutish abomination, it possesses a cunning and evil intelligence that gives it an unholy ability to trick and toy with its prey. Balhanoths can be found in the service of the fish-like dagonites, communicating with them in the same alien tongue.

Balhanoths have the ability to turn invisible at will, and due to their cold blood, they cannot be seen even by those with infravision. Balhanoths use their ability to teleport in conjunction with their invisibility to cause paranoia and terror in their prey. This invisibility wears off as soon as they attack.
Posted by Tristan Tanner at 2:23 PM