One of 4th editions little quirks was that most monsters had a few variant types, so fighting a group of them was never as simple as facing off against a horde of 10 orcs with 1 hit die each.

In some cases, these were interesting, with goblin spell casters, winged zombies, and giant mummies, but in most cases it was simply changes in armor class, damage, and hit points.

One of my favorite kinds of monsters to be given the variant treatment are skeletons. When most people think of animated skeletons, they picture something similar to the monsters that appear in Jason and the Argonauts, but there is so much room for innovation. Here are 2 interesting skeleton variants that I have plucked from 4th edition to be used with Holmes basic. 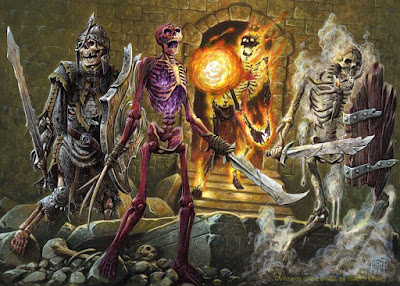 Blazing skeletons may shoot fireballs from their hands. These attacks deal 1d8 damage initially, and anyone struck by the flame must make a saving throw against dragon breath each round for 1d10 rounds or take an additional 1d8 damage from the fire, unless they somehow manage to put it out. Anyone within 5 feet of a blazing skeleton must make a saving throw each round or take 1d4 damage from the heat. 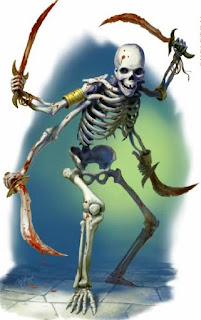 These undead creatures are made using 2 extra arms, and are enchanted to be especially resilient to attacks, as well as possessing increased speed. They are used to protect the treasure of the ancient dead, and attack anyone entering their long-dead master's tomb.