The Canary is a boss monster/slasher that lurks in the depths of the Earth. He is most commonly seen in old abandoned mine-shafts, though he can be found anywhere underground.

He looks like a tall but skinny man, dressed in tattered clothing, wearing a beaked mask, like a plague doctor’s. He does not speak, but lets out occasional screeches. His body is covered with rotting wounds and sores, leading many to believe he is undead. He wields an enormous rusty pickaxe as a weapon.

There are many legends about the Canary’s origins, the most common is that he was once an ordinary miner, left to die in a cave after the mine he worked in was flooded with poison gases. The makeshift gas-mask he brought with him was not enough to save him, and partially fused to his face as he died. The hatred in his heart brought him back to life as a horrific monster.

The Canary kills all who cross his path, but has a special hatred towards those who carry lanterns (perhaps it reminds him of the miners who abandoned him, or maybe he just has sensitive eyes). 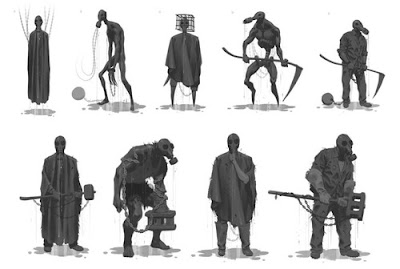 Dead Life
The Canary regenerates 1 HP each round, even if he is reduced to 0 HP. The only way to truly kill the Canary would be to somehow completely destroy his body.

Special Attacks
When in combat, the Canary can make one of the following attacks each round (Roll 1d6 to see which attack he makes):

1-3. Pickaxe
The Canary attacks his target with his pickaxe. If he hits, he deals 1d6+2 damage.

4-5. Poisonous Cloud
The Canary pulls off his mask for a moment to reveal a rotting and deformed face. He breaths out a gust of greenish gas. Anyone who breathes in the gas  must make a saving throw or take 1d6 damage. This attack does not require an attack roll.

6. Cave-in
The Canary hacks out a chunk of the ceiling with his pickaxe, causing it to fall on his target’s head, dealing 2d6 damage. Roll a d6, on a 4 or higher the target is also stunned and unable to do anything for 1 round.

Posted by Tristan Tanner at 9:23 PM