"Shuffling toward him in the darkness was the gigantic, blasphemous form of a black thing not wholly ape and not wholly insect. Its hide hung loosely upon its frame, and its rugose, dead-eyed rudiment of a head swayed drunkenly from side to side. Its fore paws were extended, with talons spread wide, and its whole body was taut with murderous malignity despite its utter lack of facial expression." -The Horror in the Museum, by HP Lovecraft 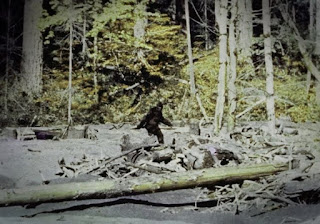 (Patty, the bigfoot allegedly taped in the Patterson-Gimlin film)

These ape-like creatures are known by many names, such as skunk ape, sasquatch, or (possibly most famously of all) bigfoot. Their most common nickname refers to the tracks that they leave, large humanoid foot-prints around a foot and a half long.

Oftentimes these footprints can be followed for a short time, and then simply stop, as if the creature vanished into thin air. The reason behind this is simple; it did vanish into thin air.

From a distance a sasquatch looks like an earthly creature, a concrete being of flesh and blood. Sure, it may be a bit strange, apes don't typically walk upright, nor do they wander temperate woods, but it appears to be something natural. Up close, however, it is a different story.

Beneath their fur is a carapace of glistening black chitin, and in their otherwise normal sockets lie unblinking, compound eyes. Their mouths, when opened, stretch to a foot or more, revealing razor sharp fangs.

These shambling horrors from beyond reality can travel through the fourth dimension at will, leading them to be found all over the globe, with their appearances often accompanied by strange lights and odd noises. Travelling between dimensions requires 1-4 turns of concentration for the creatures, during which time they appear to glow slightly with an unearthly violet light. While travelling to other realms, they become partially immaterial, and only take 1/2 damage from non-magical means.

Posted by Tristan Tanner at 6:27 PM