The Chupacabra for Holmes Basic 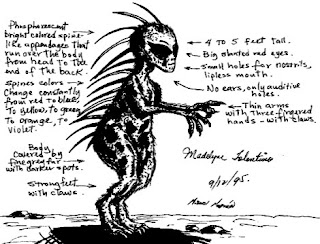 (The original sketch of the alleged creature, drawn by Madelyne Tolentino)

The chupacabra is a mysterious, 4 foot tall, reptilian humanoid, with faintly glowing spines on its back. Its name means “goat sucker”, due to its vampiric feeding habits and a tendency to kill livestock.

The chupacabra is known for killing chickens, goats, and even cows, leaving them completely drained of blood, with fang marks on their necks. Despite the creature’s size, it is exceptionally deadly.

Though the most common variety of chupacabra is that of a small reptilian humanoid with spikes on its back, occasionally there are specimens that resemble hairless wolves with a ridged back. Some specimens even have bat-like wings, granting them a flying speed of 240 feet/turn.