The Holy Empire, Part 4: The Town of Grennenburg

Taking a break from the posts describing Urth and the holy empire as a whole, I’ve decided to focus on a single town, a place that could be used as a home base for novice adventurers.

Grennenburg is a small town in the outskirts of the empire, situated near a small forest and surrounded by hills. The woods nearby are not as ancient and vast as the dark forest that fills the northern end of the empire with dread, but they are still dark and deep. Wanderers in those woods may glimpse ancient stone ruins, clearly not all of them being human-made.

A river flows through the valley, allowing for some fishing, as well as trade by river boat. This allows the town to pay its taxes of grain and other crops to the rest of the empire.

Like nearly all settlements in the empire, Grennenburg is governed by a minor noble, in this case the noble is a middle-aged woman named Lady Penn. Penn served in the empire’s army for some years, starting out as simple soldier but swiftly rising through the ranks, before retiring after suffering an injury that required her left leg to be amputated, replaced with a wooden prosthetic. As reward for her service, she was given the title of lady, and given a house in Grennenburg. Though long retired, Penn still has an obsession with honor and martial ferocity, and can often be seen practicing fencing in her backyard.

(Image borrowed from Lamentations of the Flame Princess, probably a good representation of what Lady Penn was like as a soldier)

Grennenburg is not a large place, and only has a hundred or so people living there. Most of these people are farmers, though there is a blacksmith and a small mine. The mine is not very active, nor profitable, though the occasional rare jewel or piece of gold is uncovered.

As with nearly all citizens of the empire, the town is religious, and there is a small church run by a priest named Father Cornwall. However, the inquisition doesn’t often bother with Grennenburg, since it is so small, so faith in God has declined somewhat. Sure, everyone in town still goes to church every Sunday and prays as is custom, but for most, religion is not a large part of their lives. For most, that is. 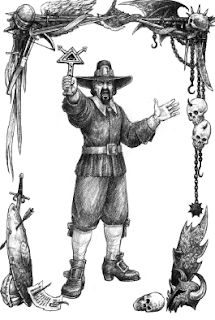 Father Cornwall is a very zealous man, fiercely devoted to God and the empire. He is always convinced that there is heresy just around the corner, lying in wait to harm the innocent. He has a small following of people who see as he does, about a dozen or less at any given time. On some occasions, they may lead witch hunts, trying people for blasphemy or magic use. Usually, Lady Penn puts a stop to these “trials” before its too late, but she has never been able to stop them completely, for fear of attracting the inquisition by punishing the zealous father.