The Holy Empire, Part 7: The Cult of the Mother Goat

“Bigger’n a barn . . . all made o’ squirmin’ ropes . . . hull thing sort o’ shaped like a hen’s egg bigger’n anything, with dozens o’ legs like hogsheads that haff shut up when they step . . . nothin’ solid abaout it—all like jelly, an’ made o’ sep’rit wrigglin’ ropes pushed clost together . . . great bulgin’ eyes all over it . . . ten or twenty maouths or trunks a-stickin’ aout all along the sides, big as stovepipes, an’ all a-tossin’ an’ openin’ an’ shuttin’ . . . all grey, with kinder blue or purple rings . . . an’ Gawd in heaven—that haff face on top! . . .” -The Dunwhich Horror, by HP Lovecraft

There are countless demonic entities that peer at Urth with thirsting eyes; among their number is the so called “Mother Goat”, the alien goddess of fecundity known as Shub.

Shub is a demonic deity of fertility, and as such, most of her cultists are farmers, recruited during hard times with a promise of food and growth. Others are attempted parents, people whose seed is weak or wombs are barren. These poor souls willingly prostrate themselves before this foul goddess out of desperation to continue their family line, and many an aged noble have found themselves praying before a tentacled idol of the Mother Goat.

In her Hellish realm, Shub appears as a gargantuan mass of tentacles, horns, and millions of goat-like eyes. Countless cloacae dot her body, continually expelling hideous demons, some of which are immediately consumed by their own mother. She is a living embodiment of birth and death.

(The Kennel Thing from The Thing)

Those that pray to this bestial matriarch are blessed with fertility. Farmers whose cows have produced stillborn calves suddenly find their fields full of cattle, and women who by all rights should be too old to give birth suddenly find themselves pregnant (sometimes without even conception occurring). But there is a price to these divine gifts. Animals born from Shub’s blessing grow quickly, but are broken and mutated, their flesh tasting sour and their body misshapen with tumors and extra limbs. Children born by cultists are barely human, masses of writhing flesh emitting a newborn babe’s cries. 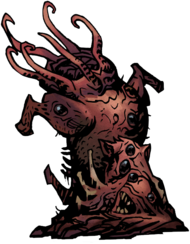 (The Flesh from Darkest Dungeon)

High priests of a Mother Goat cult are usually not fully human. Goatish eyes, tentacles hidden under flowing robes, and small horns hidden under long hair are common signs of Shub’s corruption. Even the most human-looking of Shub’s children have internal anatomies utterly alien to humanity, with vestigial organs, strange bone structures, and tumorous growths. These half-demons grow quickly, appearing fully grown after only a decade or so, and having the emotional maturity of someone much older. They often study magic from a young age, and some may even make contact with their true mother. The ultimate goal of all cults of Shub is to bring about the birth of the Screaming Child, a being so hideous and powerful that its very existence will cleanse Urth of all natural life, to give way to Shub’s legions of amorphous horrors. Nobody knows what the Screaming Child is, or exactly when its birth will occur, but one thing is for sure; if the Child is born, humanity will die.