The Hopkinsville Goblins for Holmes Basic 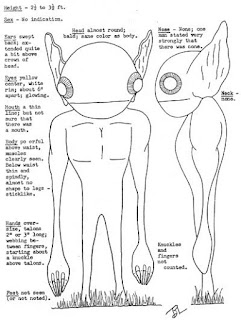 These goblin-like creatures arrive on earth in saucer-like spacecraft, usually in groups of 12-15. They do not speak, though they may giggle in an unearthly, slightly artificial sounding voice.

The beings do not possess any weapons, beyond their claws and any objects they can get their hands on. Indeed, they seem decidedly primitive in comparison to humans, with little to no tactical ability nor advanced technology beyond the strange ships they arrive in.

The "goblins" have glowing, saucer-like eyes, a line where their mouth should be, and pointed ears. They are gray in color, and do not have feet, instead hovering above the ground. Their skin is metallic, as evidenced by a clanging sound whenever they are attacked. Whatever passes for their blood glows in the dark in the rare event of them being wounded.

The aliens' usual modus operandi is pestering a small, isolated pocket of human civilization (such as a small farm) for several hours, before returning back to their ship and leaving abruptly. Some scholars believe that the creatures may be juveniles of a more advanced species, or perhaps even automatons controlled by an external intelligence.
Posted by Tristan Tanner at 10:27 PM