The Jersey/Leeds Devil for Holmes Basic 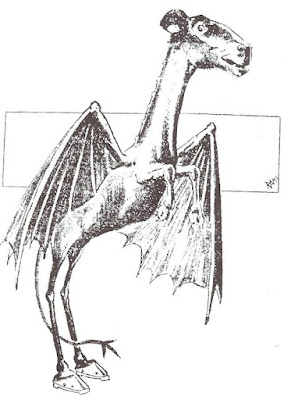 (The Jersey Devil as depicted in the Philadelphia Post in 1909)

The Leeds Devil is a hideous monster that haunts forgotten backwoods, coming out at night to kill children and livestock.

Legend has is that there was once a woman named Jane Leeds, who had 12 children. When she became pregnant with a 13th, she swore that the child would grow to be a devil. When the child was born, it originally seemed normal, but before the onlookers' very eyes it transformed into a hideous beast, with a kangaroo-like frame, wings, and a tail. The newborn creature killed the midwife and flew away out of the chimney, with Jane Leeds dying out of shock.

Some say that Jane Leeds was seduced by a devil, and that her child was not conceived by any man on Earth. Others claim that her own belief that the child was destined to be evil corrupted it into the monster it is today.

The Leeds Devil, while having infernal blood coursing through its veins, is Chaotic, rather than Lawful, due to its lack of intelligence and education.

The Leeds Devil is functionally immortal, it cannot die of old age, and it is immune to damage inflicted by normal weapons. However, silver and magic weapons can still harm it, and holy water harms it as it harms the undead.

Posted by Tristan Tanner at 6:10 PM