It is a rusty brown color, flakes of blood falling off of its feverishly shaky skinless body as it runs towards you, screaming with its clawed hands outstretched towards your throat. 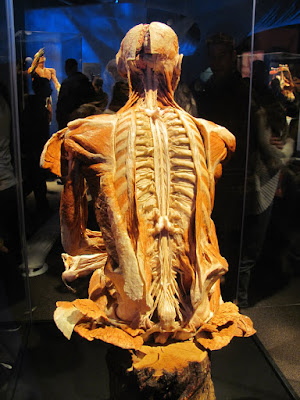 The thing slithering towards you originally looks more like a puddle of skin-colored ooze than a corpse, but as it slunk closer to the light, its sightless eyes look up at you with hatred and hunger. 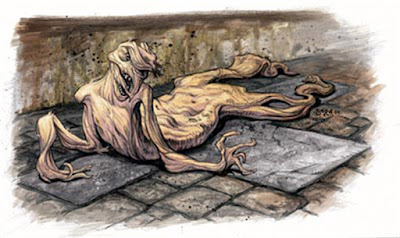 Anyone hit by a Boneless must make a saving throw, otherwise the creature has wrapped itself around its victim, and begins constricting it. The victim then takes 1d6 damage each round they are being constricted, each round being given the opportunity to make a saving throw to escape the creature's clutches. Anyone who tries to attack the Boneless while it is constricting its victim deals any damage dealt to the Boneless to the victim as well.

The Boneless can easily slip under doors and hide in extremely tight spaces, such as urns, chests, and cracks in walls.

You hack off the limb, but then its hand comes crawling after you. You tear out its intestines and they wrap around you like a serpent. What was once one creature is now a half dozen floundering monstrosities that just keep coming. 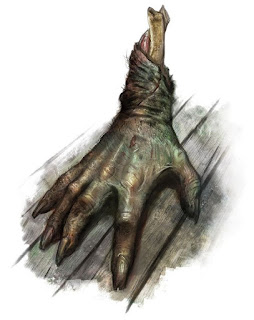 Whenever an Unkillable takes damage, part of its body comes off to form a smaller undead creature. These smaller creatures have hit points equal to the damage that caused them, have light armor, and have 1 attack that deals 1d3 damage. Similarly, the parts of the Unkillable that detach also divide when damaged.

The only way to kill the Unkillable is to burn it, or dissolve it in acid.

As you chop off the abomination's head, a surge of hope runs through your veins. But then, suddenly, a mass of rotting flesh begins to form on top of the corpse's stump, rapidly growing into a grotesque parody of a human face. 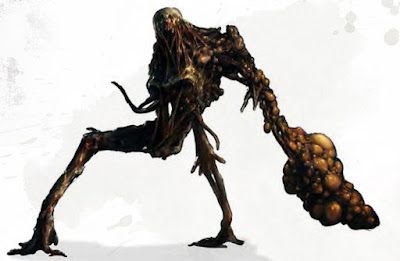 Regenerators regain 1d3 HP each round, even if reduced to 0 HP. Each time the Regenerator regains HP, roll a d6 and apply the mutation from the table below:

4. Cancerous Mass: The Regenerator's maximum HP is increased by 1d6.

5-6. Poisonous Gas: Anyone near the Regenerator as it regenerates this round must make a saving throw or take 1d6 damage.

Regenerators can only be killed/damaged without regenerating by burning them or dissolving them in acid.

It stinks of rot and decay, filthy water dripping from its pale flesh like sweat. When its decaying body is finally punctured, it pops, spraying corrosive fluid everywhere. 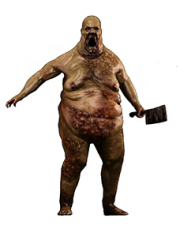 When the Bloater is killed, anyone near it must make a saving throw or take 2d6 damage from its acidic innards being sprayed everywhere.

The zombie's jerky, unnatural movement is accompanied by a steady clicking and whirring noise. Beneath the rotting skin the movement of gears and springs is easily seen. 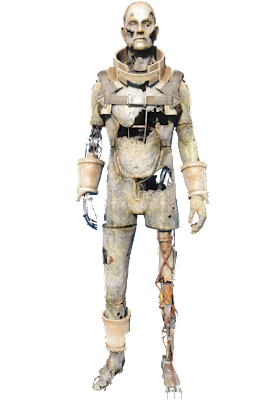 When reduced to 0 HP, the Clockwork Corpse continues to operate for 1d6 rounds. During this time, it will continuously shoot out shrapnel as the clockwork powering its body begins to break down and be launched outward. Anyone near the Clockwork Corpse as it is dying must make a saving throw each round or take 1d3 damage.
Posted by Tristan Tanner at 3:47 PM