Sometimes, when foul wizards animate the bones of the long dead, there are a few bits and bobs left over. A finger bone here, a vertebra there, until the sorcerer accumulates a vast store of osseous leftovers.

Most necromancers simply throw away the excess material, but a few crafty ones have figured out a way to get rid of their extra supplies and gain a new servant in the process! 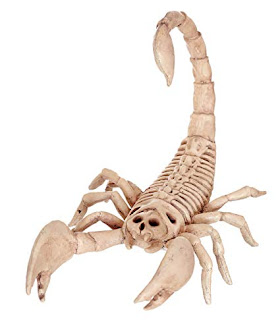 By using wires, black magic, and spare parts, wizards can create small, arachnid-like forms, called Bone Bugs. These creatures, while smaller than the typical undead, are agile, small, and dangerous.

Anyone bitten by a Bone Bug must make a saving throw against poison or die, for the fangs of Bone Bugs are coated in deadly venom.

In addition, Bone Bugs have a special ability, as determined by what Arachnid they are shaped like (roll 1d6):

1. Scorpion: Gains a second attack per round in the form of a stinger, which is treated the same as its bite.
2. Orb Weaver: Uses thread stored in its abdomen as rope, allowing it to climb up sheer surfaces at a rate of 120 feet/turn.
3. Vinegaroon: Can spray acid out of a tube on its abdomen, dealing 1-6 damage on a successful hit.
4. Harvestman/Daddy Longlegs: Armor Class is increased to 3 due to its fast movement.
5. Tarantula: The Bone Bug's bite deals 1-6 damage instead of 1-4, due to its large fangs.
6. Solifugid: The Bone Bug has a +1 to hit due to its powerful chewing mandibles.

(Edit: Since I forgot to add this when I first wrote this, Bone Bugs can be turned as skeletons, and take damage from holy water.) 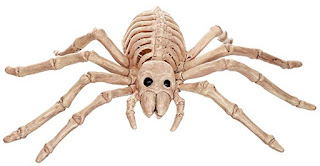