Libris Mortis: The Book of the Undead was a supplement for D&D 3.5 that detailed character options, new spells, and new monsters relating to undead monsters. In my opinion it suffered a lot from the rules and writing bloat typical of the era, but there was still a lot of goodness held within.

One of the more interesting of the new monsters that was introduced was the Desiccator, an undead water elemental. It took the form of a sickly, salt-encrusted and child-sized humanoid with no facial features other than a mouth, and whose breath sucked up water. They were essentially anti-water elementals.

Now, water elementals do not exist in the Holmes Basic set, but they do appear in the Monster Manual for AD&D, which, as explained in the Zenopus Archives, is most compatible with the Holmes rules, not AD&D.

So, without further ado, here is my take on the Anti-Water Elemental. 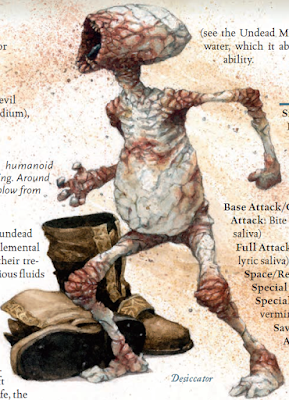 Once every 1-4 rounds, a Desiccator may breath a 15 foot cone of extremely dry air that absorbs all water in the area. Anyone within the cone must make a saving throw against dragon breath or lose 1 point of Constitution, which can be regained after one day's rest and rehydration.

Anyone struck by a Dessicator's claws takes a -1 penalty to attack rolls for 1-6 rounds. In addition, whenever the Dessicator deals damage with its attack, it regains a number of hit points equal to the damage dealt.