How to Write Usable Room Descriptions 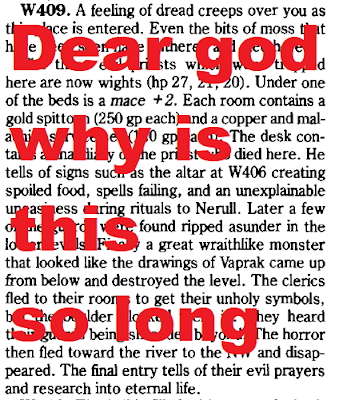 Writing an adventure is technical writing, not a narrative*. Saying what a room is with tons of adjectives and evocative descriptions is the job of the game master, not the adventure writer. This is because if the game master has to read a several paragraph long wall of text whenever the party enters a new room, the game slows down to a crawl. Not to mention, the more descriptive a room is, the more chances there are for the game master to miss something in the heat of the game.

For example, lets look at this room's description from S1: Tomb Of Horrors, by Gary Gygax:

MAGlCAL SECRET DOOR: This entrance to the remainder
of the Tomb is along the stairway which leads down. It can
be found by any means, but nothing will enable it to be
opened until the area is either viewed through a gem ofseeing, a similar spell is cast, or a detect magic spell is
used to pinpoint the magic aura. When the magic of the door
is found, it will require a dispel magic or remove cursespell to remove the guard which prevents the door from being
opened. Once accomplished, the secret door can be opened
easily from either side.

This is a very detailed description, but consider that it could very easily be summarized as the following:

Area 5 – Fangsights AttackAs you cross the bridge back toward the spiral stairway, a high-pitched screeching erupts from the sanctum. Swarming from the guano mound’s peak, a cloud of pink, fleshy grapefruit-sized globs begins to race in your direction.Each orb flies with bat wings and is haphazardly covered with multiple types of eyes and fanged mouths, as if constructed randomly from various creatures.
The fangsights attack PCs as they attempt to cross the first
narrow portion of the bridge. If the swarm successfully bites
a PC, then it coalesces around the victim trying to knock
him prone. If a PC is on a narrow portion of the bridge
when knocked prone, then he falls into the lake. Note that
leeches are still present if not previously dealt with. The
swarm is especially vulnerable to the lake’s acid. The glass
bucket from area 4b is useful here, as one bucket-full of lake
“water” causes 2d10 damage to the swarm on a successful
splash attack. PCs may also opt to lead the swarm into area
4a to avoid being knocked off of the bridge. With planning,
the party can even trap the fangsights in area 4a by leading
them in, then carefully withdrawing and closing the door.
Finally, the fangsight swarm is a “perversion of nature” and
is considered “unholy” (i.e., turn-able) to neutral clerics.
Fangsight SwarmInit +5; Atk swarming bite +3 melee
(1d6 + coalesce); AC 14; HD 5d8; hp 22; MV fly 40’; Act
1d20; SP bite all targets within 20’ x 20’ space, coalesce (DC
12 Ref save or be knocked prone); SV Fort +0, Ref +5, Will
-1; AL C.

Again, it is a very detailed description, with lots of explanation on what happens in this room. But again, it is quite a large wall of text for the poor game master to read through. I would write it as follows:

Area 5: Fangsights Attack
What you need for a room description is the following:
Unimportant information needs to be thrown out. Of course the floor is covered with dust in the ancient tomb, that's something that should be assumed! It doesn't matter that the orcs have swords stolen from the local blacksmith (unless part of the adventure hook is the blacksmith wanting his swords back). A room key should be able to be scanned in seconds, so the game master can elaborate.

Now, read aloud text is different. For new GMs, its often extremely helpful to have a ready-made, evocative description. In read-aloud text, feel free to describe things with great detail, because if a GM hasn't learned how to describe rooms yet it is important to have something they can fall back on. But the actual write-up of the room should be simple and easy to read.

I made this post because recently I've begun working on making a condensed key for WGR1: Greyhawk Ruins, a 2nd edition megadungeon based on the original by Gary Gyax. If I am satisfied with the results of my work (and comfortable with its legality), I will be sharing the resulting document through google drive on my blog. It may take a while though, as the dungeon does contain over 1000 rooms, and I also have to edit the maps to be easier to read, hopefully in flowchart format.