Morlocks are originally from H.G. Wells's novel The Time Machine, where they are the descendants of working class humanity, living underground and operating ancient machinery more out of instinct than actual intelligence. Meanwhile the descendants of the bourgeoisie and upper class evolved into the Eloi, a species of short, unintelligent and carefree humanoids that are fed upon by the Morlocks.

Pathfinder takes a different approach to these creatures, simply having them be the descendants of humans who delved into the Darklands (the Pathfinder setting's equivalent of the Underdark/Underworld), and evolved to suit their environment. In many ways they are similar to the crawlers from the film Descent. 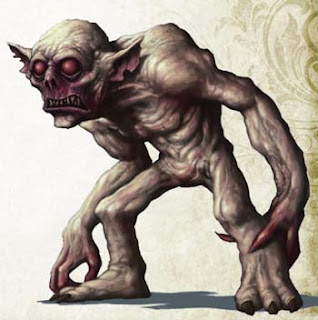 (Image taken from the Pathfinder Bestiary)

Morlocks can climb on the walls like spiders, crawling on walls and ceilings with ease unless the surface is extraordinarily smooth. They can see in utter darkness using infravision to detect body heat at a range of 120 feet.

Some morlocks have clerical abilities, and worship various evil deities of the underworld, such as Tsathoggua or Atlach-Nacha. These priests are treated as third level clerics, and have 3 hit dice instead of 2.

Posted by Tristan Tanner at 1:13 PM