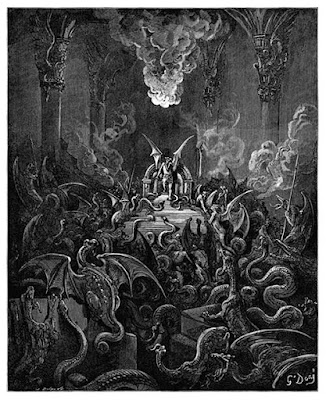 HD (Hit Dice, how many d6 are rolled for hit points, as well as what bonus is applied to attack rolls. 1/2 HD is 1d3 Hit Points, with no attack bonus.)
AC (Unarmored, light, medium, or heavy, with or without shield.)
ATK (Number of attacks and attack name/type.)
DMG (Wow much damage is dealt on a hit.)
HDE (Hit Dice Equivalent, or how many hit dice this creature is worth. A typical encounter has hit dice of creatures equal to the combined levels of all adventurers in the party. Creatures with special abilities have higher hit dice equivalents, at least 1 or so higher than normal.)

Any special abilities are listed in the creature's description.

Now I'm not that big of a fan of super balanced, planned out encounters, but if every encounter is either mind numbingly dull or incredibly hard, it can get a little bit annoying. Usually, the following should be true about combat encounters:

Of course, this is subject to change depending on the encounter. For example, if you wanted to have the impression of a slow, lumbering beast, perhaps it should have a lot of hit dice, but only one, devastating attack per round, with higher armor to compensate.

Below is a table for generic monsters, based on Hit Dice. These monsters have no special abilities, just Hit Dice, Armor, and Damage. They are assumed to have only one attack, but this could be changed depending on the scenario (for example, a 4 HD monster facing off against 4 level 1 adventurers may have 3 to 4 attacks to help even the odds). 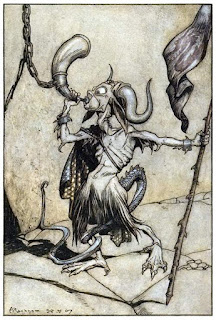 Goblins are spindly, malformed creatures that stand about 3-4 feet tall. They have viciously sharp teeth, beady red eyes, and pointed ears. Their skin can be nearly any color, though it is often pale from generations spent hiding in underground ruins and abandoned buildings.

They were once the enslaved foot soldiers of the faeries, but escaped from their cruel masters long ago. They breed quickly, and often infest ruins. They were engineered by the faeries to be violent, so their numbers are usually someone kept in check by infighting, but every so often a great goblin leader will rise up and form an army. Most goblins, however, live in small gangs, raiding human towns for supplies and holing up in abandoned places. 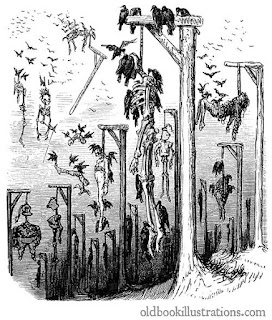 Zombies are corpses, animated by foul magic. Most are silent automatons, but sometimes they are animated by a demonic spirit, granting them limited intelligence and perhaps even the capacity for speech. 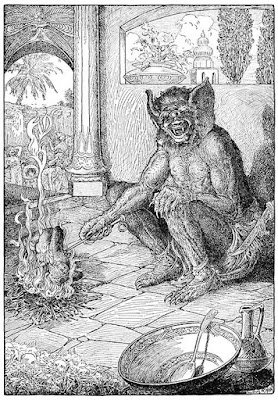 Ogres are the stunted, grotesque descendants of giants. Unlike true giants, ogres are incredibly stupid, and only stand at around 8 to 10 feet tall. Ogres have enormous appetites (with a liking for human flesh), and an inhuman lust for gold, leading to many of them to hunt down merchant caravans for food and treasure.
Posted by Tristan Tanner at 9:16 PM