My Take on Vampires 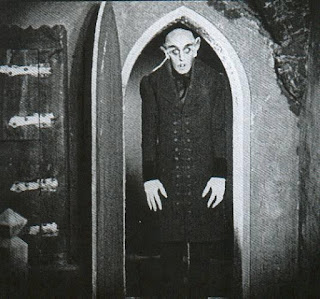 Exposure to direct sunlight causes vampires to take 1d6 damage per round, and be unable to regenerate, even by drinking blood.

Young vampires tend to merely resemble human beings, if a bit pale and with sharp teeth. However, the older a vampire gets, the less human they become, taking on aspects of other haemovores.

Roll on the table below to determine what animal the vampire takes after:

1. Mosquito: The vampire's nose and mouth fuse into a straw-like feeding organ, and its eyes grow large and black.

2. Flea: The vampire's skin begins to harden into a shell, and they adopt a hopping, crouching gait.

3. Lamprey: The vampire loses all its hair, and its teeth rearrange themselves into a circle of fangs.

4. Bat: The vampire's fingers grow long and sharp, and its incisors grow longer and razor sharp. Its ears become freakishly large and sensitive.

5. Leech: The vampire begins to sweat mucus, and become bloated. Its bones become flexible and jelly-like.

6. Tick: The vampire's neck begins to merge with its chest, and the teeth and tongue of the beast begin to merge into a disgusting feeding mouth part. Its eyes begin to shrink and migrate lower down its face. 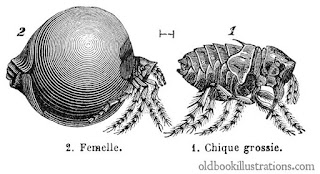 Posted by Tristan Tanner at 7:09 PM