The Corrupted Monsters of Raven Hill

The beings that flounder and wander the otherworldly town of Raven Hill do resemble their "normal" counterparts, at least superficially, but they always seem broken and wrong somehow. They are not truly the monsters they resemble, but nightmares spawned from the subconscious of any who wander into the accursed town.

Below are some tables to roll on to change the physical appearance of regular monsters to make them like something out of Silent Hill. 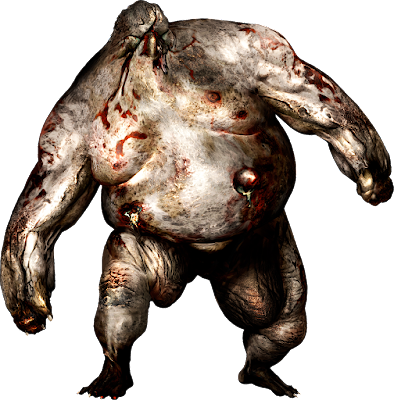 (The Insane Cancer from Silent Hill 3)

Common Traits
All (or at least most) of the monsters of Raven Hill have the following characteristics:

Movement Traits (d6)
This is some disturbing way the monster moves.
Sound Traits (d6)
What unholy noises the thing makes.

By rolling on some or all of these tables, and adding the common traits already inherent to Raven Hill monsters, you can instantly get something surreal and horrifying.

For example, lets take the common, pig faced orc. I roll a 6, a 3, a 4, and a 5. Now we have an eyeless, naked, half-pig thing that crawls like a cockroach and has vestigial limbs sticking out of its horrific body. When it opens its mouth, all that comes out is a metallic scream, and though it never actually attacks, being near the thing causes you to bleed as if being cut with tiny knives, all as a loud ringing sound fills your ears.

Lets do a giant spider next. I roll a 6, a 3, a 6, and a 6, meaning it will be somewhat similar to our first example, but that's okay! This thing is a fleshy spider, that looks like it was formed out of wet human skin. It is covered in extra human limbs that it doesn't seem to use to move, and it doesn't have fangs either, it simply poisons you by being nearby. The thing doesn't even move, it just seems like you're forced to blink and suddenly its closer. Whenever this happens, you hear a disgusting, wet, slapping noise, as the ringing in your ears gets louder. 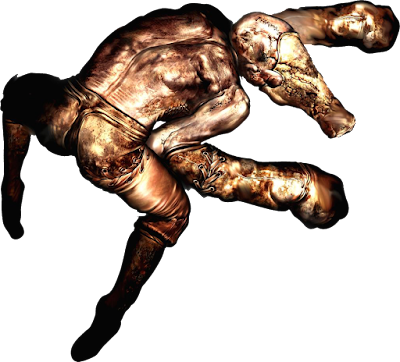 (The Slurper, also from Silent Hill 3)