The Cult of the Eternal Dance 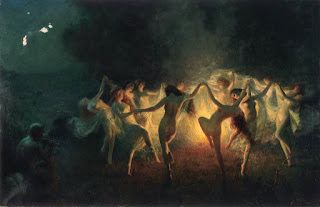 Strange, rhythmic drumming comes from the woods, a sound that you more feel than hear. You can tell it is music, pulsing, loud music, but what kind of tune is being played is beyond your comprehension. The heart-like beat of the noise is accompanied by the sounds of screams and laughter. Bright, multicolored lights emanating from the woods are reflected by the clouds, like lightning.


You are either curious, or foolish, and begin to creep into the dense mass of brush and trees, desperate to find the source of the lights and sounds. As you get closer, the beat gets louder and the lights get brighter, and the screams of joy and jubilation you heard from afar take on a panicked, feverish quality.


Finally, you reach the source of the cacophony, and what you see is almost too much for you to take in. Dozens of humanoid figures dance, leaping and cavorting with superhuman agility and endurance. But for every graceful dancer there are several broken, crushed bodies beneath their feet, many still groaning and coughing up blood. Many of the dancers have syringes sticking out of their exposed flesh, and their bodies are covered in intricate tattoos. Piercings abound, and hair is either shaved off or elaborately decorated. Teeth are filed to points, and you can swear that some of the dancers have too many limbs and joints.


The strobe-like flashing of the multicolored lights seems to pull you into the clearing where the unnatural performers cavort and frolic, and suddenly, they are upon you. Teeth and claws sink into your flesh as needles are forced into your skin, and in an instant you are torn to shreds, yet the myriad drugs coursing through your veins as you die cause you to feel nothing but manic joy...

The Cult of the Eternal Dance

The Eternal Dance is a Hell of utter chaos and ecstasy, an endless colorful cloud of lights and sounds and sensations so alien and bizarre that to gaze upon it is to invite death by overstimulation. The demons of this realm constantly shift their forms to suit whatever debauchery they desire, most often a roiling mass of limbs, eyes, ears, and tongues. These demons can produce potent drugs that can alter both the mental state and physiology of the user.

Sometimes, in order to find more Dancers, these demons disguise themselves as particularly talented composers and singers. As these "performers" gain more and more followers and fans, the demons begin to dispense drugs, said to be from foreign lands, to its followers. Each dose the demon's adoring fans take begins to change them, starting with personality. Users of these unnatural drugs become jittery, and energetic. They are irritable and constantly desire stimulation to be happy. At first, this leads to great bursts of productivity and creativity, but it soon devolves into frantic chaos.

After the victim's mind is altered, then comes the physical changes. Teeth begin to sharpen, and muscles begin to develop stronger. The drug users cease to sleep, they are constantly in motion. Their metabolisms speed up, fat burning up and constant hunger setting in, resulting in a gaunt, yet muscular, figure. Then they begin to desire human flesh, and more noticeable mutations begin to take effect, and the transformation is complete; they are a Dancer now.

Not all Dancers survive the change, nor their first dance. Their demonic patron will take them somewhere into the wilderness for a grand party, full of wild dancing, rampant drug use, and feasting upon captured victims. However, as the Dancers begin to laugh and frolic ecstatically, their muscles may snap, and their bones shatter as they land on the ground after great leaps. These failures are trod upon and even consumed by their demonic brethren, who by now have lost every last vestige of humanity.

When the dance's tempo reaches its zenith, their patron begins to morph into a shifting mass of organs and flesh, before opening a portal to the Eternal Dance. Gleefully, the formerly human cultists will follow their master through the gateway, shedding the last vestiges of mortality to become monstrous hedonists beyond time and space.

Posted by Tristan Tanner at 4:06 PM