The Goatman for Holmes Basic

Note: The following creature is a mixture of the Pope Lick Monster and the Maryland Goatman, combining elements from both legends. 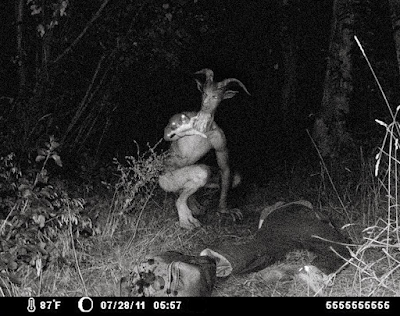 (If anyone knows the source of this image I would be very grateful, as I was unable to discover the artist)

The Goatman is a bipedal humanoid with goat-like features, including hooved feet, horns, and pointed ears. It is unknown if it is one of a kind, or a member of a whole species of goat-like humanoids.

The Goatman possesses a talent for voice mimicry, and can repeat any phrases or words that it hears. It uses this ability to lure victims closer, often imitating the voice of a child crying for help. When a victim gets close enough, the beast strikes, attacking them with a bloodstained axe, swung with supernatural strength.

There are many tales and theories surrounding the Goatman, but the most widely accepted origin of the beast is that it was once a farmer who sold his soul to a devil, through a ritual involving the sacrifice of dozens of goats. The farmer wished for immortality, and the devil granted it. When the farmer eventually grew old and died, his mind was suddenly transported into that of a goat, which rapidly mutated and twisted into the form of the Goatman. However, the hideous process left it with an eternal thirst for human blood, and an undying anger that directed all of its actions.

Posted by Tristan Tanner at 4:59 PM