You are floating, weightless. There is no sound, not even the subtle ambience of a slight breeze, everything seems almost utterly still.

You peer out into the blackness, but you see nothing. It is so dark you cannot even see your own body, or perhaps you don't have one?

Suddenly, there is light! Tiny, dim points of radiance drift into your vision. As you focus, you see that the luminescence comes from small, vaguely crustacean creatures, like ghostly shrimp. They paddle through the gravity-less darkness, seemingly uncaring about your existence.

By the miniscule light of the shrimp-things, you see movement out of the corner of your eye. Turning your head, you look closer, and gasp in awe (at least you think you do, no sound comes out).

Dimly illuminated by the crustaceans, you see what looks like an enormous jelly-fish, hundreds of feet long. The amorphous mass of tentacles drifts slowly through oblivion, mindlessly questing for food.

And then, you are awake, in your bed. 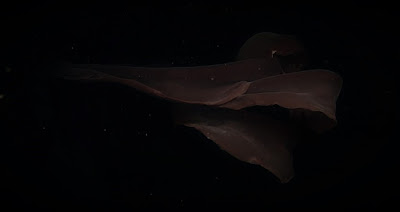 (Photo from MBARI, edited by me)

The Abyssal Void is a Hell, one of the many planes of existence that are home to monstrous beings beyond humanity's understanding. It is an endless expanse of blackness, and in many ways is extremely similar to the blackest depths of Urth's oceans. However, it is not filled with water, nor air, it is simply empty. Despite this emptiness, light doesn't seem to travel far, meaning that even the glowing organisms that float in its weightless depths aren't seen unless one is quite close.

The demons of this realm are rarely (if ever), explicitly and intelligently malevolent, usually they are simply predators, acting purely on an instinct to consume and kill. Beings summoned to Urth bring the weightlessness of their home plane with them, meaning that they are still able to move and attack effectively, regardless of how heavy they may be otherwise. This weightlessness ends if they are slain, however, and most demons from the Abyssal Void collapse in on themselves upon death, their bodies not able to withstand gravity. 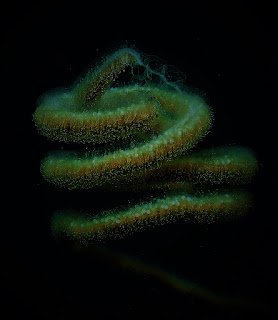 (Picture from MBARI, edited by me)

Very few people willingly summon beings from this plane of darkness and predation, most commonly portals to the Abyssal Void are made purely by accident. However, some humans have minds that are strangely attuned to the Abyssal Void, and see it in their dreams. These people begin to draw strange creatures, amorphous and gigantic, and become strangely repulsed by light and warmth. Eventually, they become full on cultists, joining others who have been touched by this plane, desiring to bring Urth there to be consumed by the myriad hunters of the lightless abyss. 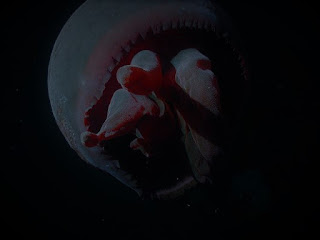 (Picture from MBARI, edited by me)

The Abyssal Void
Posted by Tristan Tanner at 5:53 PM