The Mothman for Holmes Basic 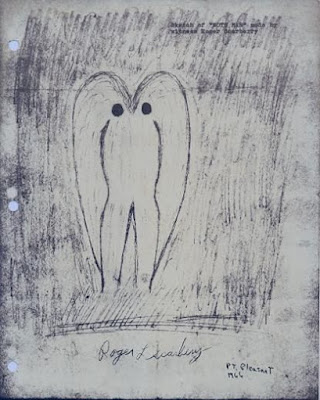 (Sketch of Mothman by Roger Scarberry)

The Mothman is an ancient harbinger of death and chaos, though it is unknown if it actually causes this destruction or is merely an observer. The Mothman resembles a faceless, armless humanoid with glowing red eyes and large leathery wings. Its feet end in claws, which are its only method of attack.

Things go wrong in the Mothman's presence. Thief skills are only half as likely to succeed, and attack rolls take a -2 penalty. When casting a spell, roll 1d6. On a 5-6, it goes wrong somehow, either harming the caster, affecting a friend, or simply causing an explosion. The exact specifics are left up to the DM.

In addition, anyone the Mothman looks at must make a saving throw against turn to stone or feel horribly sick, taking a +2 penalty to Armor Class and a -4 penalty to saving throws.
Posted by Tristan Tanner at 11:31 AM