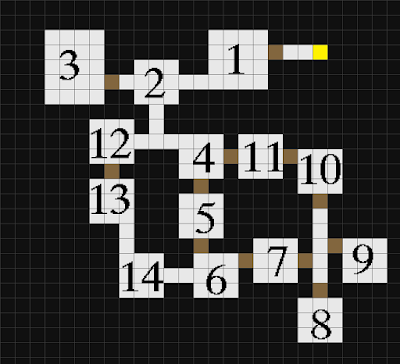 I've been writing a lot of setting fluff and house rule nonsense recently, nothing that is really practical. So, I decided to make a small rudimentary map and write a short dungeon. Nothing serious, just something fun and usable. It doesn't include combat stats or damage for the traps, but the treasure is designed for a 1st/2nd level party, as are the encounters.

Dungeon Background/Hook
There is a mound out in the wilderness, constructed in prehistoric times. The ancient builders of the mound are long dead, their civilization destroyed, all that is left are the subterranean tunnels and strange artifacts left under the mound.

1. A large magic circle is painted on the floor, but it is broken, some of the bricks having been shattered.

2. An empty fountain lies in the center of the room, with a spout resembling a dragon. There are 250 coins worth of silvery discs inscribed with pentacles on them in the fountain's basin.

3. A group of 8 animated skeletons attack anybody who enters the room, guarding a golden orb that sits on a pedestal. The orb is worth 1000 coins.

4. There are statues of humans, wearing strange garb. One of the statues has a golden tiara on it, worth 250 coins.

5. The floor suddenly collapses under the party's feet, revealing a deep pit with jagged spikes at the bottom!

6. 8 goblins are rooting about through pottery, searching for silver discs with pentacles on them. They will threaten to attack unless the party leaves them alone, claiming that the "treasure is ours!!!" There are about 500 coins worth of the silver discs.

7. The floor gives way to a large pit. At the bottom of this pit are 4 venomous snakes, starving after they fell down here months ago.

8.  10 goblins, appear to be trying to find the way out of the dungeon. One of them is holding 2000 coins worth of silver discs. They are neutral to the party initially, and will offer treasure in exchange for the party helping them find the way out, but will attempt to stab them in the back as soon as possible.

9. There is a wildman here, someone born in the wilderness and raised by wolves, who eventually found this mound where he now lives. He cannot speak, but can communicate with grunts and gestures. He is suspicious of outsiders, but not cruel. The wildman has a magic amulet that allows anyone wearing it to see in the dark. A small, golden statuette of a tentacled god lies on the ground nearby, worth 500 coins.

10. The room has small holes dotted about the floor. If one steps near them, a spear mechanically jabs up from the hole to attack the intruder.

11. The room is strewn with web, and a massive spider crouches on the ceiling. Some bodies of goblins can be found wrapped in the web.

12. The walls of the room are covered with small tubes. The floor is a large pressure plate, and if activated, poisoned darts fire from the walls in every direction. It is possible to avoid the darts by crawling on one's belly, as the tubes are at eye level.

13. A statue of a serpent, coiled around a globe of the planet, lies at the end of the room. On an altar in front of it, 1000 coins worth of gold nuggets lie as offering.

14. An open stone sarcophagus lies in the center of the room, with a well preserved human corpse lying in it. It holds a red gem, worth 2500 coins, in its hands. If the gem is touched, the corpse will sit up and begin to scream in an unknown language, before rapidly decomposing and dissolving into slime.

Posted by Tristan Tanner at 7:44 PM