"Weirdness" doesn't necessarily mean "new stuff". Sure, most authors of weird fiction invented new creatures, new deities, and new places for their work, but weirdness is more of an atmosphere than just throwing unfamiliar things together and making something odd. For example, practically every Star Wars movie adds never-before-seen creatures, planets, and places into its universe, but it hardly ever comes across as weird in execution. The goal of this post is to prove that an adventure doesn't have to reject all of D&D's traditional monsters in order to be weird.

Without further blathering, here are 6 weird adventure seeds that don't use any new monsters.

Strange, stunted humanoids (goblins) have been seen dancing in the ruins of a stone circle, around a huge bonfire. However, whenever anyone has approached to attack the creatures, the bonfire has suddenly gone out, and the monsters are nowhere to be seen. Every night that this inhuman dance has occurred, a child has gone missing from the village. 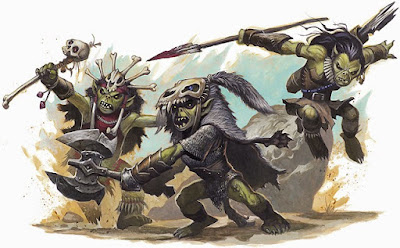 The ruins of an old castle on the moor has begun to look less like a ruin, and more like an inhabited building! Slowly but surely, the walls have been built up, the windows replaced, the moat refilled. The construction seems to be happening only by night, since during the day there is no obvious signs of work, and nobody is home, but when the sun goes down, there are rumors that you can see walking corpses (zombies) lifting huge stones and tirelessly working to rebuild the old fortress, overseen by a pale, translucent figure shrouded in fog (a ghost). 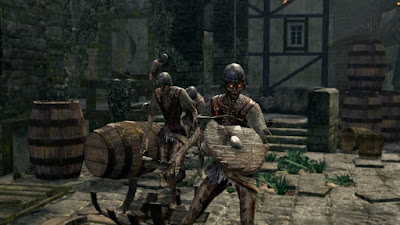 A hulking, human-shaped thing made from solid metal (an iron golem) has been rampaging across the countryside, leaving death in its wake. On its metallic flesh it bears the seal of an ancient occult library, built by a pre-human race that fled into the underworld millennia ago (the ancestors of the drow). The library is now drowned beneath the nearby lake, but through the use of some strange potions brewed by the local witch, one could easily be able to delve into the lake for a day or two. Legend has it that this metal man can be "deactivated" using a magical word inscribed on a stone tablet within the library. However, the waterlogged but magically preserved corpses of the race still guard the ancient library (mummies and skeletons), as well as protoplasmic blobs of primordial ooze (various slimes and jellies). 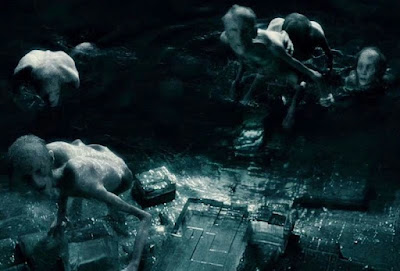 4. The Thing In The Cave

A once peaceful clan of troglodytes have been recently leaving their cavernous home and raiding neighboring settlements. They don't take gold or food, just live prisoners (they leave behind any corpses). The truth is, an intellect devourer crawled up from the depths of the underworld and killed their leader, taking over its body and convincing the other that the toad-lizard god Laogzed demanded sacrifice, and now feeds on the minds of the living captives of the troglodytes. 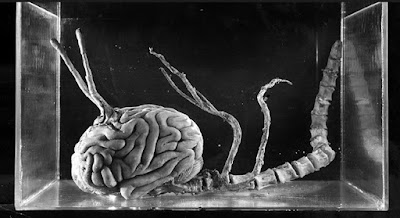 (One of the monsters from Fiend Without a Face)

Legend has it that a powerful artifact (that the PCs of course need), is located in a ruined garden, full of old statues and overgrown plant-life. However, it is rumored that the garden itself is alive, and consumes any who enter its moss-covered gates. In truth, a number of gargoyles live in the ruins, disguising themselves as old statues. 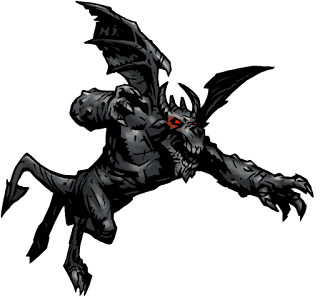 (A gargoyle from Darkest Dungeon)

What was once a verdant and lovely woodland is now choked with webs, with spiders crawling underfoot. It is not uncommon to find squirming birds and squirrels captured in ropes of web, hanging from trees. In the shadows of the wood, strange, hunched figures (ettercaps) can be seen, and the clacking of huge mandibles can be heard at night. And in the dead of night, inhuman voices can be heard, chanting: Iä! Lolth regina aranea! 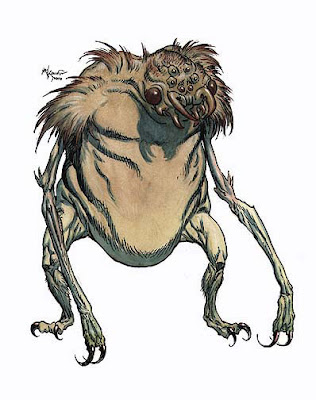 (An Ettercap from 2nd edition AD&D)
Posted by Tristan Tanner at 9:46 PM