Below is an explanation of how I would go about running Dungeon Crawls in Raven Hill, my psychological horror mini-setting inspired by Ravenloft and Silent Hill, and first detailed in this post. I hope you enjoy! 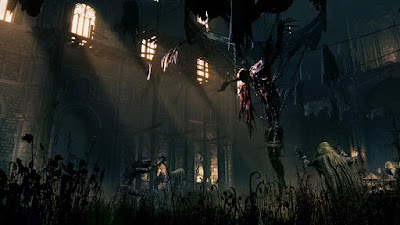 Reasons For Exploring Such A Terrible Place
Exploring an adventure site in most areas is done for the purpose of finding gold, or perhaps a magical artifact. In the cursed town of Raven Hill, however, entering a "dungeon" is usually done for very different reasons.

Reason 1: Escaping The Town
Most of the time, people enter Raven Hill's Fogworld by accident, and have no desire to stay there. Thus, exploring dungeons is usually done to find some kind of way out. The town's Fogworld version is generally impossible to escape through natural means, with  roads leading off into a void, endless forests that loop back around to where one started, and giant walls of iron. Finding a way to escape the town usually involves performing some kind of ritual, usually with very specific components that are scattered about various locations. Thus, a party must explore the twisted depths of their own subconscious as Raven Hill tries its best to stop them from escaping, or kill them.

Reason 2: Confronting The Source Of Guilt
Sometimes, visitors to Raven Hill have nothing left to fear in life, and just want to face their guilt and be cleansed of sin. Such individuals who enter the town may not want to get out, but instead desire to reach the very heart of the haunted place, and face their worst fears. Those that take this path may die in the process, but if they survive the ordeal, and defeat the physical manifestation of their remorse, then they can be reborn as a stronger person, and the town will let them free. 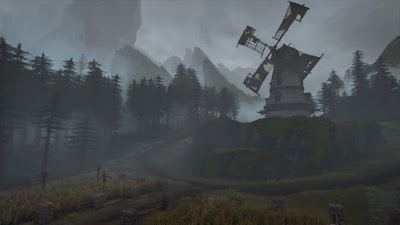 (Barovia as depicted in Neverwinter)

Unnatural Architecture
Any dungeon should be a departure from the ordinary, but this goes doubly so with those in Raven Hill. The layout should seem subtly off, and traveling through a dungeon's corridors should be disconcerting. Doors could lead to the same room one just left, stairs leading down connect to a room on the same level, and vast open spaces may exist where none could be possible.

Sparse On Treasure, High On Tools
Gold coins, magic weapons, and other treasure should be rare, if included at all. When one delves into the unknown in Raven Hill, it is to find some form of key to unlock another location, eldritch knowledge to help one escape, or a way to the heart of the town to confront one's guilt. Due to this, gold is not a priority.

However, this isn't to say there shouldn't be anything to find. Cryptic notes, odd statues, keys that don't seem to fit anywhere yet, and improvised weapons may be found. Treasure in Raven Hill should help the party survive and progress, not just fill their pockets.

Using The Otherworld
Each room in a Raven Hill dungeon should have two versions; the Fogworld and the Otherworld. When the castle's bell tolls, the world changes, trading gray for red, and fog for rusted chains and grates. Doors that were previously locked are now opened, things that were once corpses become monsters, and keys that are needed to progress are found. The tolling of the bell could be random, say, occurring on a 1 in 6 chance each time the party enters a room, or it could only occur when a specific trigger is activated, such as picking up an item or defeating a monster. Generally, the Otherworld version of a dungeon should hold more enemies and traps that its Fogworld equivalent. 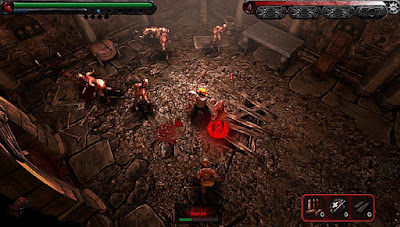 (From Silent Hill: Book of Memories)

NPCs Are Rare And Strange
Usually, I recommend having 1 NPC for every 10 dungeon rooms. In Raven Hill, decrease that to 1 NPC for every 20 or 30 dungeon rooms. Replace places that would normally have NPCs with cryptic notes, a corpse, or something else that fulfills a similar purpose to an NPC. The party should feel isolated and alone.

What NPCs are found should be very odd indeed. Anyone in Raven Hill is plagued by guilt, and is understandably under a lot of stress due to their environment. How people react, however, will vary from person to person. The individuals the party encounters should not be very emotionally stable, and conversations could rapidly turn to confrontations if one's words aren't chosen carefully.