Goblins In The Holy Empire

(Image taken from The Hobbit: An Unexpected Journey)

Goblins are not native to Urth, they arrived on this planet with the coming of the faeries. They are creatures made from fey magic, born of slime and blood, specially created for the invasion of Urth after demons invaded the faeries' home plane. After this invasion failed, and that faeries were driven into the forests of Urth, the goblins escaped their servitude, and have become the dungeon-dwelling creatures we know today.

Faeries are long lived and powerful, but don't have large populations. Even before the demonic invasion, the faerie population was quite small compared to humanity, and after their world was destroyed, their numbers dwindled even further. As a result of this, the foot soldiers of the faerie were made to reproduce quickly, trading quality of soldiers for quantity.

All goblins are capable of giving birth, and do so without any form of sexual reproduction. Goblins are born in large litters, and are capable of reproducing from as soon as they reach adulthood until their death. Their numbers usually do not grow too large however, for goblins are inherently violent creatures, and will war among themselves if there is no enemy to unite them.

Goblin lifespans vary wildly from strain to strain, with some specimens living a couple decades at most while others live for centuries. This is due, in part, to the extremely unstable genetics of goblins, resulting in wild mutations. These mutations are what created the other subspecies of goblins, also called goblinoids.

A typical, non-mutant goblin is a human-like creature standing at around 3 to 4 feet high, with red eyes, pointed ears, sharp teeth, and sharp nails. Most goblins are bald, but some have strands of wispy hair. Goblin clothing, armor, and weapons are either stolen, or made from whatever they can scavenge.

The following mutations/sub-species are documented and most well-known, but there are many more varieties lurking out in the wilderness:

Bugbears/Bogeymen
Unlike the typical goblin, bugbears are very large, and covered with thick hair, which is usually black, brown, or green. They are uncannily silent, and are known for sneaking into towns at night and killing and eating the settlement's sleeping inhabitants. In addition to their silence, bugbears are extremely agile and flexible, allowing them to squeeze into tight places a similarly sized creature would not be able to, leading to the legends of bogeymen underneath beds. 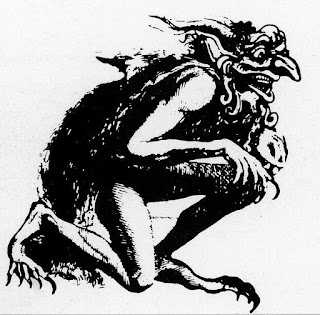 Kobolds
While most goblins live underground to some extent, kobolds are a subspecies which has adapted almost perfectly for life below the surface. Kobolds have extremely sensitive eyes, allowing them to see almost perfectly in the dark, and are even smaller than common goblins, allowing them to squeeze through even the smallest of cave entrances. They are very pale, and have a slightly scaly appearance.

Hobgoblins
Hobgoblins may, at first, simply seem to be extraordinarily tall goblins, with some specimens reaching nearly 6 feet in height. However, beyond simple physical differences, hobgoblins are also intellectually different from their smaller cousins. While not necessarily any smarter, hobgoblins have more restraint and patience, resulting in much less infighting and more cooperation. As a result, hobgoblins tend to be better organized and tactically aware than other goblins, leading devastating raids upon human villages. 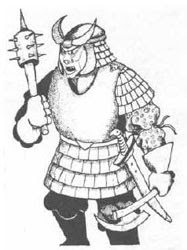 (Hobgoblins as depicted in the 1977 Monster Manual)

Grindylows
Resembling frog-like goblins with long arms like gibbons, grindylows are an amphibious species of goblins that typically live in bogs and lakes. They are more animalistic than their brethren, and tend to spend most of their time lurking beneath the water, waiting for something (or someone) to approach the water so they can drag them down and drown them with their long arms. 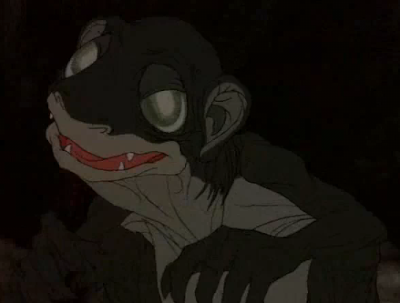 (Image from the Ranklin Bass adaptation of the Hobbit)
Posted by Tristan Tanner at 10:41 AM