Around a century ago, the great Barbarian warlord, Lucius Gelt, began to die of a strange wasting disease. In his final days, he instructed his followers to build a tomb for him in the hills, to contain his corpse and his gold. Gelt's tomb was trapped to prevent intruders from stealing his ill-gotten loot, and his warband's wizard created monstrous guardians, to ensure his eternal slumber is not disturbed. 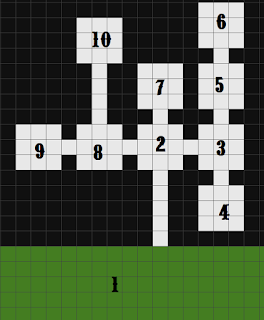 1. The Scarecrow
Standing outside of the entrance of the tomb is a crude scarecrow, with beady button eyes and sharp pieces of wood sticking out of its sleeves.

The scarecrow is animate, and will attack as soon as the party turns their back on it.

Immune to poison
Resistant to bludgeoning, piercing, and slashing from non-magical weapons
Vulnerable to fire


2. Pit Trap
The room stinks of mold and decay, but appears empty, aside from some fungus growing on the walls.

In front of the western exit is a pit trap, carefully covered over with loose bricks (DC 15 WIS check to spot). If stepped on, characters must make a DC 11 DEX save or fall down the pit, taking 1d10 damage.

3. Weapon Rack
There is an empty wood weapon-rack against the wall, along with 3 stands for armor.

The empty armor stands and weapon-racks are empty due to the skeletons in room 8 using the weapons and wearing the armor.

4. Hanorath the "Demi-Lich"
The room is bare, but there is a single skull lying in the corner. You can hear whispering emanating from it.

The skull will begin to speak louder when approached, loudly proclaiming itself to be "Hanorath the Demi-Lich", and threatening to vaporize the intruders. It has no real power, but can make itself glow faintly. The skull believes itself to be a 1 million year old immortal wizard. In actuality it is a very confused minor spirit that is possessing a skull.

5. Pile of Bones
A headless skeletal corpse lies on the ground here.

This is the rest of Hanorath's body.

6. Crawling Claws
An urn sits atop a small dais. It is decorated with pictures of severed hands.

If the urn is opened, 10 crawling claws scuttle out and attempt to kill and sever the hands of whoever released them.

Immune to poison and being turned

7. Battle Standards
The captured battle standards of many barbarian warbands are stored here. Most appear to be of old groups that no longer exist, but at least one of these flags seem familiar.

One or more of these battle standards belong to a barbarian clan that still exists, they would be very grateful if the flag was returned to them.

8. Skeleton Warriors
3 chattering skeletal warriors stand in this room, fidgeting. They immediately seem to see you, despite their lack of eyes, and rush towards you!

Immune to poison
Vulnerable to bludgeoning

9. A Hellish Vision
As soon as you enter the room, the smell of brimstone fills your nostrils. The walls melt away, as does the corridor behind you, until you are standing on a vast plain of ash, the sky covered by thick clouds of black smoke. In the distance, you see a tall figure clad in impossibly heavy iron platemail. You can see his glowing red eyes through the visor. Then, just as suddenly, the room is empty.

There is nothing anyone can do to cause the vision to occur again. What the figure is and what the vision means is up to the game master (or just listen to the players' theories and spin off of them).

10. Lucius's Sarcophagus
A chest lies against the wall, overflowing with glittering coins and other treasures, but the most impressive feature of the room is a large, stone sarcophagus. It is said that within the coffin is the body of Lucius Gelt, along with the magical items he carried in life.

Anyone who tries to open the sarcophagus will attacked by a spear trap that is hidden in the ceiling (DC 15 WIS check to spot). If it is activated, the spear attacks with a +6 to hit, and deals 2d10 damage. Lucius's corpse is wearing a Hat of Disguise, clutches a +1 Greataxe, and has a Stone of Good Luck resting on its forehead. The chest against the wall contains five 50 gp gems, 2200 cp, 1000 sp, and 60 gp.
Posted by Tristan Tanner at 3:41 PM