The Brain Eaters (My Take On Mind Flayers)

A hunched over, bearded figure in a brown cloak stumbles towards you in the dark, pitiful and weak looking. You sigh, wishing not to attack such a humble creature. He probably is just an old beggar, lost and cold. If you had your way, you'd let him into your master's house, but your orders are specific.

"Halt!", you shout, "Turn back please, Master Smith is not accepting visitors at the moment".

At this, the cloaked man stops his stumbling, and looks up at you. Though you can't see his face, you feel fear, as though the ragged old man in front of you is gazing into your very soul. Then, before your eyes, he begins to change.

He, no, it, begins to stand up, unfolding from its hunched position. As it straightens, the thing you once thought was only 5 feet tall at the most now stands nearly 7 feet in height. The worn, brown cloth gives way to hideous, wet looking black leather. The gray beard morphs into a mass of writhing, purple tendrils, dripping with mucus, and long, clawed talons extend from the sleeves of the now ebony cloak.

Before you can draw your sword, you hear a horrific screeching noise, as blood begins to drip from your nose. You are paralyzed, completely unable to move as the monstrous abomination strides towards you. You can see its eyes now, they are white, like a boiled fish. It grabs your head with its talons, and the last thing you feel before everything fades to black is the burning sensation of acid melting through your skull. 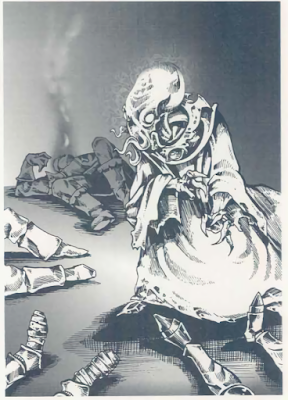 (Image taken from Monstrous Arcana: The Illithiad, and run through Waifu2x to remove some jpeg artifacts)

Brain Eaters are inhuman creatures from another plane of existence that (as their name suggests) derive sustenance from the brains of sentient beings. They dwell in otherworldly cities miles beneath the earth, coming up from time to time to gather information, slaves, and brains to eat. They do not have a language, instead communicating directly into the brains of others through telepathy, which is why they don't have a proper name, since translating a concept into words from a species that has no idea of language is difficult. The mind of a Brain Eater is completely alien to human psychology, it is cold, calculating, and ruthless in the extreme. It is unknown what the Brain Eaters want with our world, but legend has it that they are merely advance scouts for a great invasion force that shall arrive when the stars are right.

Brain Eaters are 6 to 7 foot tall purple-skinned humanoids with a head resembling that of a 4 armed cephalopod. They have pure white eyes, and their skin is covered in a thin layer of mucus. Brain Eater clothing usually consists of black leather robes and cloaks.

Anyone struck by the Brain Eater's tentacles is grabbed by the monster, as it attempts to burrow into their brain using powerful digestive enzymes. Each round, the victim may make a saving throw to attempt to escape. If the victim does not escape in 1d3 rounds, the brain eater reaches the victim's brain, killing them instantly.

Brain Eaters have an exceptionally strong intellect, which allows them to enforce their unholy will upon the world around them using nothing but their mind. A Brain Eater has 1d3 of the following abilities:

Mind Blast
1d6 targets within line of sight of the Brain Eater must make a saving throw or be paralyzed for 2d6+1 rounds.

Disguise
The Brain Eater appears, to all observers, to be a harmless humanoid creature of average size and height. Anyone who sees the Brain Eater and is suspicious of the creature being not what it appears may make a saving throw (the GM rolls in secret). If the saving throw is made, the character may see through the disguise (the Brain Eater does not know this).

Inflict Terror
1d6 targets within line of sight of the Brain Eater must make a saving throw or become supernaturally terrified, doing anything in their power to get away for 2d6+1 rounds.

Boil Brain
A target within line of sight of the Brain Eater must make a saving throw or take 2d6 damage and lose 1d3 points of INT, WIS, and CHA as their brain boils in their skull. If a saving throw is made, the damage is halved, and the target does not lose any INT, WIS, or CHA.
Posted by Tristan Tanner at 11:27 AM