NOTE: The lore of the monsters, as described by me, is modified to be more setting neutral, and is not indicative of the actual backstory of these creatures in Dark Souls 3. All images are taken from the Dark Souls 3 and Dark Souls Fandom wikis.

There are some who obsess over their every imperfection until the very sight of their face drives them to rage. Some of these few become so desperate as to require rebirth, engaging in foul rituals to change their forms and be, quite literally, born again from the womb of a witch. However, this process sometimes goes wrong, and the resulting creatures are hideous and in constant pain. 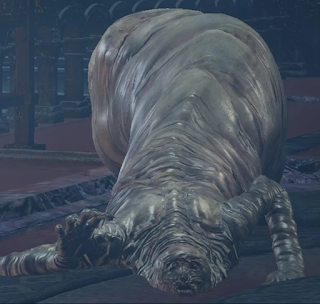 Ghru
HD 2
AC unarmored or by armor worn
ATK 2 claws or 1 weapon
DMG 1d3 each or by weapon
HDE 3
Special: Due to their corrupted and poisonous nature, any attack by a Ghru requires the victim to make a saving throw or take an additional 1d3 damage per attack.

They say they were men, once, but after spending too much time isolated in the poisonous bog, something in them snapped. And when their minds went, so too did their bodies, becoming the hideous goat-like beings you now see. Their very touch brings corruption and decay. 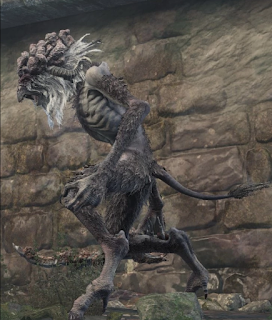 Cage Spider
HD 4
AC heavy
ATK 3 claws
DMG 1d6 each
HDE 4
Special: The cage spider cannot be sneaked up on, as the corpses that compose its limbs can see in multiple directions.

Some necromancers lock up 4 corpses in a small cage, and animate them all as one entity. The resulting being is called a Cage Spider, and is a relatively cheap but effective guardian of blasphemous laboratories and dungeons. 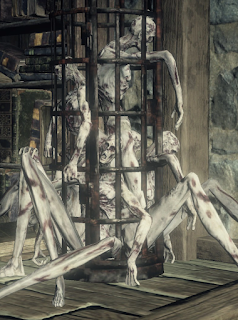 Posted by Tristan Tanner at 9:30 PM