Ghosts In My Home Game

A few months back I posted about the origins of various monsters in my home setting. For ghosts I gave the following:

Ghosts are the psychic imprints of the dead, the personalities and consciousnesses of creatures the deceased given an incorporeal form and magical abilities. Some believe that only certain people possess the psychic capability become ghosts after death, while others believe that anyone who dies with enough emotional energy can come back as a spirit. Still others believe that ghosts are not human at all, and are simply demons hijacking the psychic energies of a deceased person to manifest themselves on earth.

But what traits do ghosts have, really? I absolutely don't agree with D&D's traditional interpretation of ghosts, as 10 HD powerhouses that are most easily able to be slain by phasing into the ethereal plane, and whose principal attack either takes away agency from a player (magic jar) or has a neat effect but no real explanation as to what it does (aging the character 10-40 years).

I like simple monsters, at least from a mechanical standpoint, and to me, a ghost should be no different. Sure, a ghost will have some special abilities seeing as it is the quasi-physical shadow of a dead human being, possibly being used by a demon as a vessel, but its attacks will still do damage, and it will still be able to be harmed (though magical weapons are required).

More importantly is the following; all ghosts should be a little different. One ghost, for example, may have the weakness that if their bones are found and given proper burial rights, the monster is dispelled, while another may only be put to rest if immersed in running water.

Generally, however, ghosts should be incorporeal, allowing them to walk through walls and take no damage from non-magical means, as well as turn invisible at will. Beyond that, the sky is the limit.

Here are some d6 tables to help come up with a ghost:

How Does The Ghost Attack?

What Can The Ghost Do?

What Is The Ghost's Weakness?

5-6. It can only manifest at a certain time or day.

How Can It Be Dispelled?

Using these tables, here is an example:

This is the ghost of a man named Henry Rice, who died in a fire. Its attacks cause the flesh of his victims to be scorched and burned. It appears as an amorphous sheet-like mass, and communicates telepathically. It can only manifest at night, and the only way to dispel it without killing it through magic is to prove to the ghost that it is really dead. 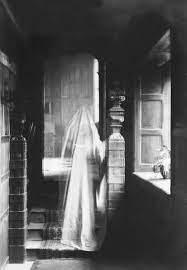