Is Doom A Megadungeon? 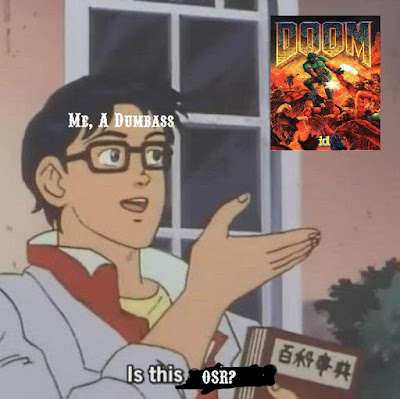 For those of you who don't know the rich backstory of the Doom franchise, let me catch you up on some of the lore;


The main gameplay loop of doom is as follows;
Does this sound familiar? It seems awfully close to a standard dungeon crawl, minus the treasure of course. "Treasure" in Doom is mostly ammunition, health kits, armor, and power-ups. In addition, there is no gaining levels, and you can respawn at the start of a level when you die. But at its core, Doom has the makings of a megadungeon game.

Lets take a look at one of the maps for Doom

This is The Hangar, the first level of the game. Its a little hard to read what is there, just from the map to the untrained eye, but it contains 2 traps (pools of acid), 3 secret doors, and some combat encounters, along with "treasure" in the form of ammo, health, a shotgun, and armor.

If I wanted to, I could modify this to fit a fantasy setting and run it as the entrance to a demonic temple. The monsters in this level are possessed soldiers (zombiemen), and spiky demons that shoot fireballs (imps). If I just change the soldiers' equipment to be leather armor and swords instead of rifles and a combat vest, suddenly they could easily be zombie guards animated by the demon cult to protect their secrets. The shotgun could just be a magic item of some sort, such as a wand of magic missile.

To finish off this mess of a post, here are some demons from Doom (and Doom 2) converted to my house rules (Images taken from doomwiki.org):

Imps are brown, furry humanoids with bony spikes protruding from their bodies. They may shoot small fireballs as projectiles, but prefer to tear their victims apart with their claws. 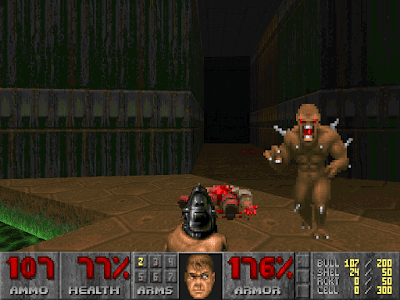 Named for their skin color, pinkies are violent, gorilla-like demons with a maw of sharp teeth. Some pinkies have evolved to be transparent, resulting in a higher armor class and the ability to hide in darkness without being noticed 5 out of 6 times. These nearly-invisible pinkies are called spectres. 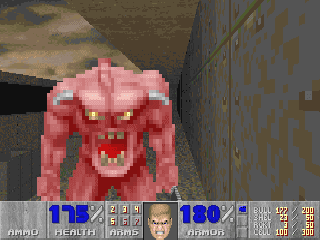 These lesser demons are large, flying skulls with horns that are on fire. They are not particularly intelligent, and some believe this is what happens to the souls of sinners after the demons torture them over the centuries. 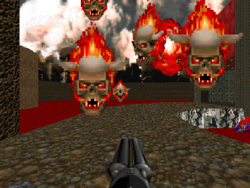 These demons take the form of one eyed, brown orbs with tiny vestigial arms. Their mouth can unhinge, allowing them to disgorge Lost Souls at will. It is thought that Pain Elementals act as living portals to Hell. 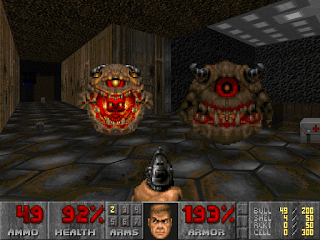 Archvile
HD 7
AC heavy
ATK 1 flaming gaze (automatically hits as long as the target is within line of sight)
DMG 1d6+2
HDE 10
Special: Each round, an Archvile can choose to restore a dead demon within melee range of it back to life (with full HP restored) instead of attacking.

The archviles are foul demonic necromancers, capable of bringing their fallen allies back from the dead. Their very gaze can set their victims on fire. 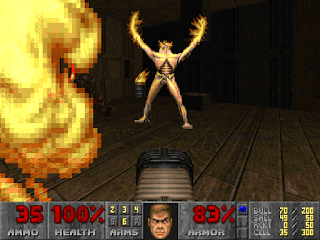