Some Inspirational Illustrations From The Compendium Of Demonology And Magic

The Compendium Of Demonology And Magic, or, to give its proper latin name, Compendium Rarissimum Totius Artis Magicae Sistematisatae per Celeberrimos Artis Hujus Magistros, which loosely translates to A Rare Summary of the Entire Magical Art by the Most Famous Masters of this Art*, was a book published by an unknown author at some point around 1775 (though the book claims to be much older). While I don't speak latin or German, and therefore I am unable to read the text, I am able to appreciate the excellent watercolor illustrations contained within.

The copy I downloaded was from Holybooks.com, which is a very good source for grimoires and other occult texts if you are on the lookout for them.

Without further ado, here are some of my favorite illustrations from the tome, along with possible applications for use with D&D. 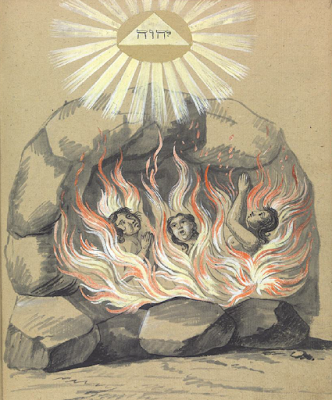 I wanted to point this one out for I believe it depicts sinners being destroyed by the wrath of God, here represented by a triangle (presumably representing the trinity) with the tetragrammaton written within it (YHWY, a 4 letter name of God written in the Torah). This use of symbolism to represent a deity is much more interesting than, say, Jesus or some bearded white man in robes, and I could see potential in depicting a cleric's deity in this way, rather than through a more humanoid avatar. 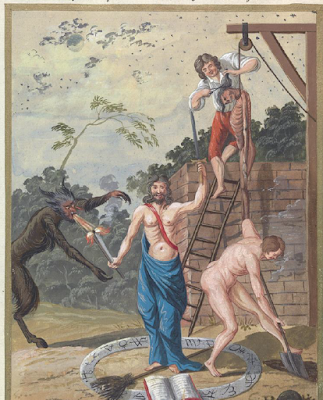 Protective circles against summoned demons are a very interesting concept, and the story I interpreted from this picture is that the 3 men have hung someone to summon a demon, which the central man in the blue robes is fending off while trying to bind the fiend or dismiss it. 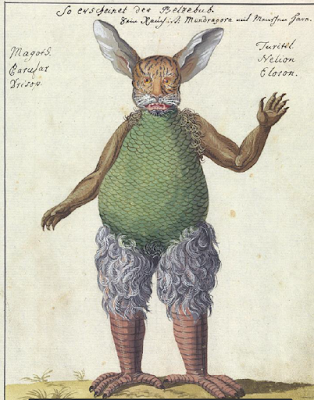 This image just screamed out "botched polymorph", and I love it. Can you imagine the party wandering the wilderness, only to encounter this strange beast, and then discovering that the creature was once a human being? 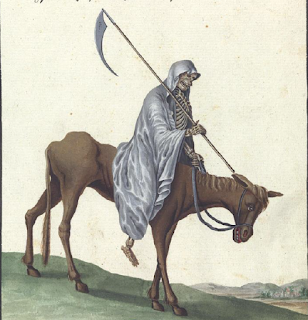 I love me a good grim reaper, and this one certainly fits the bill. I especially like how tired and emaciated the horse looks, as though it is literally and metaphorically near death. Alternatively; skeletal warrior riding a zombie horse. 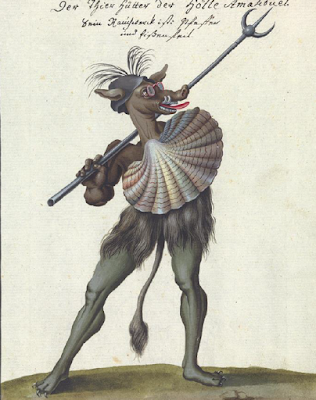 I don't know who are what this demon is supposed to be but something about it just screams orc to me. I love it 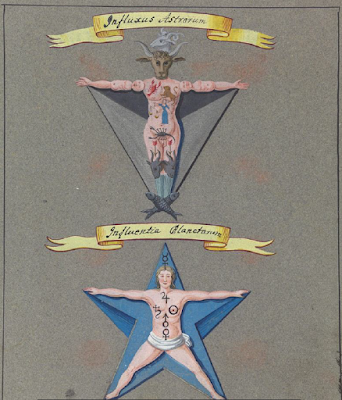 My immediate thought when seeing this was "Chaos vs. Law", and the idea of using a black triangle to represent chaos and demons, and a blue pentagram to represent the natural order. 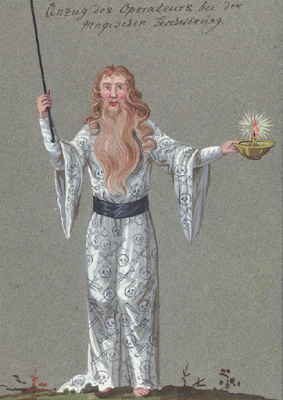 This is what a magic-user should look like. Also, I find his skull and crossbones pajamas hilarious.

And, finally, as a bonus, here are the sigils of some angels.

If you would like to check out this tome for yourself, here is a link. I hope you enjoyed!