One of the main goals of my house rules is to allow for character creation in around 5-10 minutes, so that less time is spent making a character and more can be spent exploring the unknown. I decided to put that to the test. I set up a blank character sheet, with spaces for things to be filled in when determined, opened up the .pdf, and turned on a stopwatch. My results were better than I expected.

4 minutes and 53.82 seconds later, I had a character, all ready for adventuring. Now, granted, I am the one who wrote the rules, so I already knew what I was doing, but even if it takes the average person twice as long, that is still (barely) under 10 minutes! 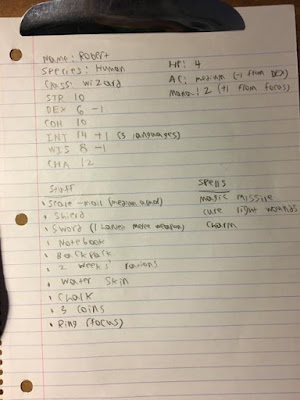 So, what did I learn from this test?


I think my character creation system for my house rules is basically done, now I just need to do some more work making things easy for the game master. I already have written out my formula for making what I think constitutes a good dungeon, now I feel that I should probably add:

Posted by Tristan Tanner at 1:02 PM