The Stimulated (A Hunter For Survival Horror Scenarios)

"If you are not very careful


It has no appeal


I know exactly why I walk and talk like a machine

-"Oh No", by Marina and the Diamonds

Goons with probes inserted into their pleasure centers; wired up so when they kill someone, they get paroxysms of ecstasy. In essence, customized serial killers.


It stands at around 8 feet tall, with muscles grown unnaturally large due to steroid use. Metal cords like ropes of steel stick out of the thing's flesh. Covering its eyes is a bulky VR headset, with a small camera mounted above. The ears are covered by cubes of black plastic.

It was human once, a young man who spent most of his life staring at a screen, ears plugged up with headphones to blot out the world around him. His parents didn't know what to do, and when they found the ad talking about a summer camp for curing video game addiction, they jumped at the chance to get their son back to them. So they sent him away. He never came back.

The camp was a front for a cult, one that worshiped the union of technology and flesh. They were searching for a suitable subject to turn into the ultimate super soldier, a being that is half-human, half-machine, and for whom bringing death and destruction causes pleasure and joy. The young man was promised an eternity of fun and leisure, free from responsibility and worry, just endless fragging. Of course, he accepted. He didn't know the killing would be real.

After the injections, the surgery, the augmentation, there was barely anything left of the man. All it knows now is the joy of destruction, free from inhibition and remorse. As far as it knows, its just playing a very realistic, very fun game. And the player characters are the monsters it has to kill to get to the next level.

The Stimulated
HP: 36 (3 for every hit die the players have as a whole)
AC: Heavy
ATK: 1 Fist or Melee Weapon
DMG: 2d6
Special: Every time the Stimulated kills a character, the massive amount of endorphins and dopamine produced results in it regaining 1d6 HP. In addition, the Stimulated can see perfectly in the dark due to its augmented camera for an eye.

If the Stimulated's VR headset is somehow removed (it is surgically implanted, so this will take some doing), it will realize what it has done. If this happens, there is a 3 in 6 chance it will go on a berserk rampage before committing suicide, otherwise it will immediately die from shock. 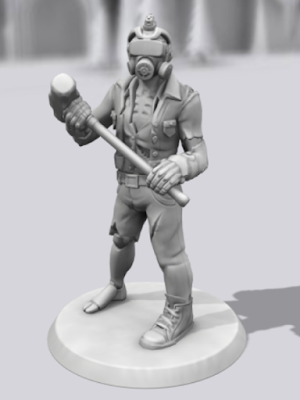 (My attempt at making the Stimulated using Heroforge)