My Unwarranted Opinions Of Leveling Systems

Honestly at this rate I'm going to need a separate tag for long boring posts about my opinions on things. 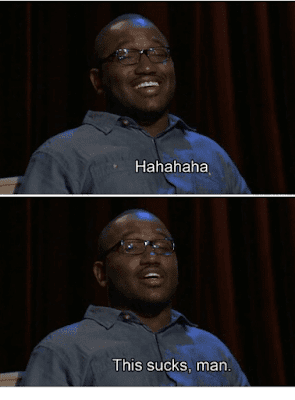 This method is dumb, it sucks, it takes too long and requires too much combat. I know the stereotype of Old School D&D is "Go into the hole, kill orcs and take their stuff", but combat is far too lethal and XP for kills in Ye Olde Dungeons & Dragons to make this method of leveling up logical or fun. Also just, murder for experience seems dumb, like "I am a cleric I gain my powers from my faith in God and I just murdered a bunch of dudes and now I can heal people better" doesn't make sense.

I think I read something somewhere about people giving XP for each room/hex/whatever they find, something like 100 XP for a room or something. This seems fun, I'm not sure how the progression would work out as one gains higher levels, but it seems like it would maybe work?

I like and use this method the most but it doesn't make sense. In a gameplay sense it does, since retrieving treasure is sort of the point of a dungeon crawl, so the more successful you are the more money you will get. However, the whole idea of someone getting better at life because they find money doesn't really seem logical. This can be worked around by having one have to pay money to train to gain XP, but that seems silly to pour thousands of coins into an NPC's pockets to gain +1 to hit and an extra few hit points.

This is fun if done well and garbage if done poorly. Upsides: you don't have to worry about balance when it comes to coins and combat encounters, since that isn't what determines how fast characters level up, and it gives the game a more "epic quest" feeling to it, since after accomplishing some great goal the PCs become more powerful. Downsides: If the quest the party completes feels minor/pointless this whole method feels stupid for everyone involved. Like, if I'm a level 1 thief and I hit level 2 because I helped find some candles for an old man whose candles were stolen by kobolds I won't feel satisfied.

5. You Just Level Up After A Set Number Of Adventures

This is what happens in Into The Odd and Shadow Of The Demon Lord, and I think it works reasonably well. However, what constitutes an "adventure" could be debatable, and this makes it harder to run open ended sandbox games or megadungeons.

6. Whatever Maze Rats Is Doing 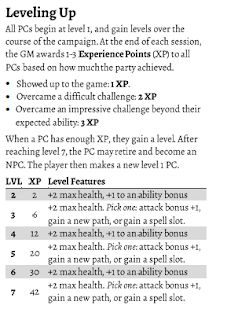 This is rad. I like this. I might just steal this and use it in my house rules.
Posted by Tristan Tanner at 10:51 PM