Warning: The Following Is A Pointless, Ambling Ramble With No Rhyme Or Reason

Rak-Arnesh is not properly a megadungeon, since each level has about 20 rooms (well, exactly 20 per level so far, but whatever), and typically proper megadungeons may have anywhere from 100 to 400 rooms per level! However, something to note about this is that classical megadungeons were not very detailed.

Lets take a look at WGR1: Greyhawk Ruins, a later attempt to publish Castle Greyhawk as a module. This is one of the few published megadungeons, and it is incredibly verbose, much more so than Gygax's original notes for the dungeon.

Even in Greyhawk Ruins, a module which is, in my opinion, nigh unusuable due to the vast degree of information given, there are some rooms that are just marked as empty, with no detail at all.

Sometimes multiple rooms in a row. And some keyed areas encompass such a ridiculously large amount of space that they may as well have just been marked as empty, such as this: 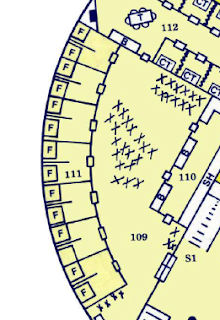 Except for one special room, that whole area is all keyed as 109. All of those other rooms are just empty, with no details beyond what was given in 109 and displayed on the map.

Lets take a look at a sample dungeon level, drawn by Gygax himself. 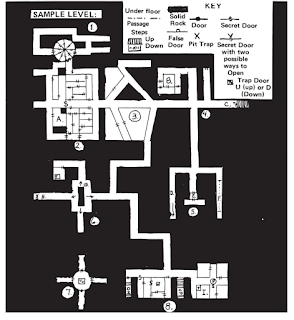 Notice the abundance of corridors, dead ends, and empty rooms. There are some interesting keyed areas here, but they are buried in a labyrinth of unused space.

In this excerpt from Hawk & Moor by Kent David Kelley, Gygax's method of stocking dungeons is explained, a manner that was shocking to me when I first read it:

20 to 25 encounters were written, and then simply repeated multiple times. On the one hand, this is completely genius, saving time while allowing for an enormous dungeon. On the other hand, detail does suffer somewhat in the end.

Now, lets say that typically each monster encounter was repeated 3 times on average, and with just 20 encounters total, for a total of 60 encounters. Next, consider that "as a general rule there should be far more uninhabited space on a level than there will be space occupied by monsters" (Booklet 3 of OD&D), so lets say there twice as many empty spaces as occupied spaces, with 120 empty rooms. We are left with 180 rooms, 2/3rds of which are mostly empty (obviously some of these otherwise empty rooms may have traps and special things), while in reality one only has the content of about 20 combat encounters and the specially keyed encounters (lets just arbitrarily say there are 20 of them).

Consider modern dungeons, where every room has at least something. In my Dungeon of Rak-Arnesh, for example, every empty room has at least a single line describing something interesting about the room. In the 70s, where a dungeon would have over a hundred rooms on just one floor, that would have been nearly impossible to be any fun to make!

If there is any conclusion to this stream of consciousness mess of a post, I guess it is this: Its okay to be lazy when making a megadungeon, because the fun and excitement of megadungeon play comes from resource management, emergent narratives, and high risk versus reward. The details, while important in smaller dungeons, special rooms, and similar situations, aren't quite as big of a deal anymore. A lot of the magic of these dungeons comes from improvisation, player shenanigans, and role-playing, not whats written on a key or drawn on a map. Its okay to just have a room read "12 orcs, each carries 15 gold" once in a while. Its only bad if that's all that's in your dungeon.
Posted by Tristan Tanner at 5:41 PM