Woodwose are what happens when humans or demi-humans are kidnapped by faeries. Through eldritch rituals, the humans become bestial and hirsute, growing sharp teeth, and occasionally even small horns. These creatures are sometimes used by the faerie folk as slaves, similar to how the goblins were used before they escaped their bondage, but sometimes they are simply released into the woods. Woodwose are sometimes called beast-folk by commoners, and few know that they were once human beings. 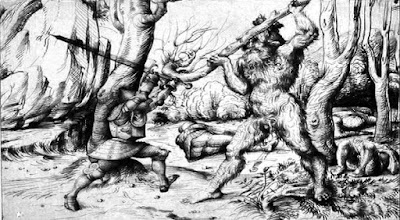 Changelings are malicious faeries that can take the form of any humanoid being they touch. This process occurs over the course of 1d6 rounds. In their natural form, changelings appear as chitinous, stunted humanoids with sharp teeth and sharper claws. They typically come in the night, abducting or killing their victims while they sleep, and then taking their place. Changelings, while mildly telepathic and able to answer simple questions about the person they are imitating, are usually unable to perfectly replicate their victim's personality.

(Taken from D&D 3rd edition. Add teeth and this is general idea of what they look like.)

Pixies look like small humans (around the length of an adult human's finger), with wings sprouting from their backs. The exact specifics of this form vary from pixie to pixie, with some having bat-like wings and an only barely human form, closer to a hairless chimpanzee, while others may resemble comely, perfectly formed humans with butterfly wings. Due to their slight size, many people underestimate these faeries, at their own peril. Pixies can turn invisible at will, and perfectly mimic human voices, and use these abilities to lure victims into woods, to be turned into woodwose or killed. 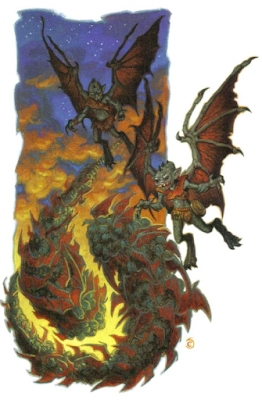