Right! Its time for the second dungeon. There are currently three other requests for dungeons, and in the spirit of the OSR, I'm going to roll for them on a d3 table.

D3
1. Scott Anderson: "a Peasant Hero and some varlet who wants to frame him for a crime."
2. Matt: "I'm partial to Skaven"

3. matt (a different one): "An old witch's house, built on the edge of a cliff overlooking a cliffside beach. She's lived unnaturally love waiting for her man to return. ..and he just happens to look like one of the party members."

I rolled a d3, and my result is a 1, so it looks like it is peasant hero time!

But before that, here are two links to 30 minute dungeons made by other people!

Now then, its dungeon time! 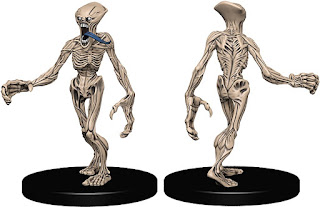 (I like this Pathfinder doppelganger miniature, I'd use it to represent the changeling in this dungeon if I had one.)

Hook
A local man, one Timothy Fitzgerald, a local hero, famed for stopping a goblin attack a few years back, has been accused of murder by several residents of the town, who saw him kill someone in cold blood before fleeing the crime scene. Timothy's lover, George Curwen, is convinced it wasn't the real Timothy, and that Hilda Whitewood, a woman who loves George, felt jealous of Timothy and used foul magic to steal Timothy away, replacing him with an evil duplicate. George has seen Hilda sneak away into the woods by night, towards an old ruined castle, and has begged the party to investigate.

General Background
George is right about Hilda, she made a deal with a shape-changing faerie called a changeling to ruin Timothy's reputation. She doesn't have the heart to kill the real Timothy, however, instead capturing him and keeping him in the nearby castle ruins. She is going by night to bring him food and water.

1. Castle Entry Hall (E)
The ceiling is cracked, allowing moonlight to slip in through, giving the room an eerie feeling. A few crumbling stone pillars hold up the roof, and moss grows on the walls and floor.
If one looks carefully, they can see that there are footprints in the moss and dirt on the floor, leading deeper into the castle towards room 10.

2. Crumbling Floor (T)
The floor here is giving way to nature, tree roots have burrowed like worms into the stone, causing cracks and damage.
If one isn't careful, the floor might give way in some areas, causing characters to fall into shallow holes, potentially breaking legs.

3. Giant Spiders (C)
A web like that of an orb weaver is in the corner, the desiccated corpse of a deer trapped in it. The source of this web is immediately obvious; a giant spider sits at its center.
The spider is hungry but cautious, and is unlikely to attack more than one opponent at a time, and may even attempt to play dead if injured. It only wants food, it has no desire to continue fighting if the odds are against it.

4. Snare Trap (T)
The corridor appears fairly normal, though the ceiling has given way entirely, and it is somewhat dark due to a large tree looming above. Rubble covers the floor.
Hilda is a skilled hunter, and has set up a snare here to capture any who would try to rescue Timothy. If triggered, the trap will cause any who step in the hidden snare to be snatched upward, dangling from the tree by their leg.

5. Drinking Hall (E)
Tattered banners, a throne at the end of the room, and a huge decrepit wooden table make it clear that this was once a place of merriment and drinking. A few casks even stand in a corner.
The casks of wine in the corner are exceptionally valuable, having aged very well.

6. Wild Boars (M)
The room is pitch black, but as you enter you hear shuffling and snorting.
Some wild boars have made their home here, and will attack intruders. Also in the room is the corpse of a hunter which they dragged in here. His corpse has a pouch containing some coins.

7. Faerie Puzzle Box (S)
This small room contains a chair and a desk with an odd metal box atop it.
If one observes the box, they will find that it has faerie runes inscribed upon it. The runes, if translated, read as follows: "I came before trees, I came before Urth, I will be here long after, for mortal souls I thirst. Who am I?" If the faerie word for death is spoken, the box will open with a click, revealing a gold pendant, intricately carved and built around a red gem. Anyone who wears the pendant is made immune from disease and aging, but only while wearing the pendant; if it is taken off, they will rapidly experience all disease and aging they would have undergone while they were wearing it.

8. Armory (E)
Weapon racks line the walls, with bows, spears, swords, and other weapons of war leaning haphazardly in some of them.
All the remaining weapons are rusted, broken, or just badly made. They would work for a few hits though.

9. The Changeling (M)
A tall, strong man (obviously Timothy) stands with his back to you, gazing at the wall, his hands folded behind his back.
The changeling disguised as Timothy knows that the players are here, and is feigning ignorance to gain the upper hand and let them get close. When someone approaches within claw reach, it will reveal its true form and attack, trying to kill as many as possible. It will retreat if gravely injured, and try to use the real Timothy and/or Hilda as a hostage.

10. Timothy And Hilda (N)
Timothy lies chained to the wall, and is being fed soup by a woman you immediately recognize as Hilda.
Hilda is not very good at keeping secrets, and will admit everything if confronted, realizing the game is up. Timothy is forgiving of her, and wishes her no harm as long as he is let free and the faerie slain.
Posted by Tristan Tanner at 9:37 PM