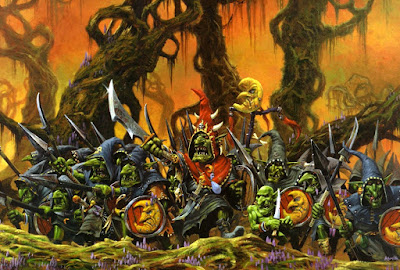 The first request for a dungeon comes from Alberaan, who writes "I would like night goblins and trolls!"

I am more than happy to oblige, goblins are always a lovely starting point for a short delve, and I don't use trolls nearly as much as I should. Without further ado, here is what I came up with!

Hook
For as long as anyone can remember, there has a been a gang of disgusting, pale goblins that lurk in a cave a few miles away from the nearest settlement. They dislike light even more than those typical of their species, and come out only at night to do mischief. Rumor has it that they have a vast store of gold and jewels, stolen over decades, hidden within their wretched lair.

General Background
A group of goblins have been living in a cave, only coming out at night, for generations, causing them to develop extremely sensitive skin. This gang is strengthened by the presence of a troll, which serves them as long as it is provided with an ample supply of fresh meat.

1. Falling Boulder Trap (T)
The cave mouth yawns widely. A large boulder seems precariously perched right above the entrance, supported by some rope and wood.
There is a razor thin piece of sinew just at human chest level in front of the entrance, hidden in the shadows. If it is walked into, the boulder will fall and begin to roll forwards, crushing anyone trying to enter.


2. Goblin Guards (C)
A few stunted, pale greenish humanoid creatures dressed in black robes lean on their spears, clearly tired.
These goblins are sleepy, and it may be possible to sneak past them if one is careful. However, if too much noise is made, or a bright light is shone, they will immediately awaken and try to slay the intruders.


3. Latrine (E)
A pit in this room is filled with the most disgusting filth imaginable; goblin droppings. There is an odd rod-like object half sunken in the odious feces.
The rod submerged in the filth is a magic wand, the nature of which the goblins could not ascertain, and thus they threw it away. A magically inclined character will be able to figure out how the device works, and discover it allows the user to make invisible things visible, and vice versa.


4. Storage (E)
Crude barrels and stolen chests fill this part of the cave. Some are overflowing with rotting, ill-preserved meats, while others carry various supplies like arrows and pieces of wood.
A decent supply of arrows, a few flasks of oil, a bow, and a stolen sword and shield can be found among the mess, along with a few pieces of scattered jewelry and coins.


5. Covered Pit (T)
The corridor continues deeper into the cave, sloping down slightly. Debris like bones, sticks, and rocks litter the floor.
The debris covers a tanned hide, meant to conceal a pit trap with wooden spikes at the bottom.


6. Troll Lair (C)
Lurching out of the darkness, something huge and leathery and tumorous looms towards you. Its teeth are like daggers, and its general form is like a cyst covered gorilla with a hideously human-like face!
The troll is likely to attack on sight, though it is possible to communicate with it. It likes fresh meat, and only sides with the goblins because they provide it with food.


7. Goblin Barracks (C)
A large group of goblins sits around at a stone slab for a table, while some sleep on crude cots. The ones at the table seem to be working on manufacturing spears, torches, and arrows.
The goblins are busy, but at least one is likely to spot the party if they aren't careful, sounding the alarm and rousing the others. Some may try to go to Room 6 and get the troll to come to their aid.


8. Imprisoned Storyteller (N)
A man is shackled to the wall with rusted, ancient chains. He is dressed in the clothes of a traveler, and a series of puppets lie on the floor nearby.
This man is named Jeffrey Williamson, and he was a traveling storyteller, before being captured by the night goblins. They keep him alive for entertainment, both in telling stories of war and conflict, as well as throwing stones at him. He is desperate to be free, and knows that there is hidden treasure in Room 9.


9. Graves (E)
Mounds of stones and the stench of decay tell you that this is a grave site, where the night goblins "bury" their dead.
One of the graves does not actually contain a corpse, but a chest! Within the chest are several coins, jewels, and expensive golden cutlery.


10. Mushroom Farm (S)
A small field of large, oddly shaped mushrooms is the only feature of this room.
These mushrooms are used as a source of entertainment for the goblins, acting as a natural hallucinogen. If ingested, not only does it provide the user with psychedelic visions, but it also causes them to experience an unnatural bloodlust that grants them a bonus in combat.
Posted by Tristan Tanner at 7:59 PM