Rethinking Demi-Humans And Faeries In The Holy Empire

Why do people want to play elves? Think about that for a second, mull it over, because there are many different answers and there is no right one. I don't doubt that some people want to role play elves because the idea of being an immortal, beautiful forest twink is sexy, but it is unlikely to me that everyone who creates an elf character does so out of a sense of attraction.

No, to me I think that the core appeal of the elf is the ability to be something alien, something inhuman, but not grotesquely so. To be something outside of the human experience, to have the wisdom of an old scholar and the body of an youth. That is the appeal.

Now consider how elves are portrayed in my setting. If you are an elf you have faerie blood running through your veins, and as a result you are better at magic and have pointed ears. You are forced to live among other demi-humans because the Empire is bigoted.

That's pretty boring isn't it? To role-play a character whose background does nothing but give minor stat modifiers and makes people dislike you for no real reason? That's stupid, I have no idea what the Hell I was thinking when I came up with this.

All my demi-humans in my setting were like this, just descendants of humans who begat children with faeries. An interesting idea, but in no way as deep and detailed as other interpretations. There isn't much role playing opportunity.

So lets try this again.

Humanity is but one branch of a larger tree. Imagine a world where neanderthals never went extinct, and the relatives of humanity branched out and began forming their own civilizations. That is what happened with humans and demi-humans in my world. Elves, dwarves, halflings, humans, etc. all descend from a single source, somewhere in the distant past. Of these species, humans have been the most successful, with a faster reproductive rate and greater desire to expand, but that doesn't mean demi-humans are inferior, they are just more localized.

While there are many different human nations, there are usually only one or two different nations for each demi-human species, which are usually distant from human nations. Demi-humans are almost universally foreigners, travelers from distant lands seeking adventure. Many humans spend their whole lives never seeing a demi-human.

With that explanation of WHAT demi-humans are out of the way, lets get an explanation as to WHO they are: 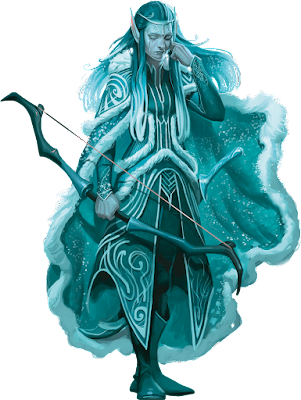 (Taken from Mordenkainen's tome of foes)

The elves live on the Southern continent, in a land surrounded by mountains and forests. Among all demi-humans, they have the most positive relationship with the faerie folk, a fact which has led to some viewing elves with fear.

Elves are somewhat shorter and smaller than humans, with a wide variety of skin, hair, and eye colors. An elf is as likely to have brown skin as they are to have purple. Owing to the warmer climate of their homeland, elves are not very hairy, and facial hair is hard for them to grow beyond a faint mustache. It is not known exactly how long elves live, and as far as most are aware, no elf has ever died from old age.

Owing to their constant interaction with faeries in their homeland, elves are not a very religious folk. To them, magic and miracles are nothing more than a simple fact of life, nothing to get all excited about.

Elves do not have a very strong grasp of gender, for a variety of reasons. For one, all elves are naturally androgynous looking, and for another, when one lives as long as an elf does, being restricted in one's life by gender roles quickly becomes tiresome. Elves do not have a concept of gender in their own culture, and usually simply adopt whichever pronouns/gender is convenient for them when they enter human society, if they choose a gender at all. 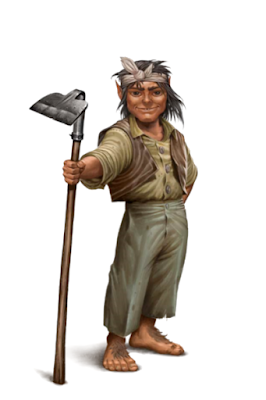 (From Pathfinder?? I think?)

Halflings live on a small island off of the coast of the Eastern continent. They live in a mostly agrarian society, with few large settlements. Halfling culture emphasizes sustainability and a healthy respect for nature. Halflings worship a variety of deified folk heroes, whose stories are told in songs and poems.

The average halfling is about 3 to 4 feet tall, with thick soled feet for climbing the rugged cliffs of their island home. Otherwise they mainly resemble humans. Halflings live around two to three times longer than humans.

These folk are probably the most accepted of demi-humans in the Empire, as their short stature and culture of simplicity and sustainability seems nonthreatening. 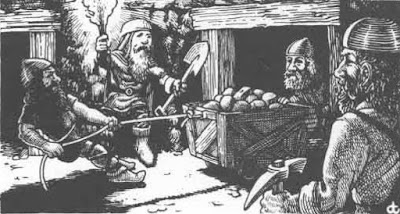 (From the 1st edition Advanced Dungeons and Dragons Player's Handbook)

The rugged dwarves live to the North of the Empire, an inhospitable wasteland of cold and ice. The secret to their survival lies underground, in the upper reaches of the underworld.

Dwarves have adapted to underground life well. They are short, usually 4 to 4.5 feet high, and have incredible vision in the dark and an insensitivity to pressure. All dwarves are very hairy, with full beards, to better trap heat to survive the cold environment.

Dwarves worship a pantheon of deities, each representing some facet of the world around them. Dwarven culture is focused around survival, and the betterment of the whole rather than the happiness of the one. It is true that dwarves love gold and jewels, but not for any monetary value they hold, but rather the sheer beauty of them, and in such an underworld that the dwarves live in, such items hold little to no value.

Thats a good enough basis for the three main demi-human species. I should also write up similar short write-ups for some other human nations, but that's a post for another day.

So, currently as written in my setting, faeries fled their home plane from demons and then warred with humans for domination over the planet, and lost, being forced to recede into the forgotten places of the world.

This seemed cool at the time but now doesn't really match up with my own assumptions of what a faerie is, for the following reasons:

So I have gotta scrap this, its neat but doesn't fit what I want faeries to be like. So here is my new interpretation of them: 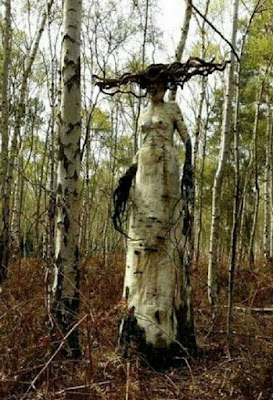 Humanity and its relatives are not the first intelligent creatures to roam Urth. Before humanity, there was an age of magic, chaos, and passion, this was the age of the faeries. These days are over now, and the once populous faeries of the distant past have receded, into the woods, ancient prehuman ruins, and caves.

The fall of the faeries from power and grace was not sudden, like the collapse of a building, but gradual, like the gentle drifting of a loose feather falling from a great height. Perhaps they are simply tired of life, tired of the constant frenzy of existence, preferring to spend the rest of eternity hiding in the forest. Nobody knows for sure, but one thing is known; the faeries are terrifying. Some faeries simply want to live a life of seclusion, but others, in their boredom, have developed bizarre and dangerous desires, such as stealing children, transforming people into animals, and just straight up murdering people.

Faeries exist in a variety of different forms, and it is not known how they are related, nor what makes a creature a faerie as opposed to some other organism, but faeries can identify another faerie when they see one.

Goblins are creatures which are absolutely not faeries, but it is almost universally acknowledged that goblins are faeries' fault. At some point in the distant past, as a prank, or perhaps in an attempt to make servants, some faerie created the first goblin; a highly adaptable creature who breeds rapidly and whose children quickly mutate into new forms. Unfortunately, the creature was also a chaotic, impulsive monster. The faeries view goblins with shame, and are embarrassed as a species that they are responsible for their existence.

Posted by Tristan Tanner at 7:21 PM