Scolendra, The Queen Of Vermin

For cultural reasons, most people in the Holy Empire find insects, arachnids, and other "bugs" disgusting and filthy, and an irrational fear of such creatures is not uncommon. However, some have genuine reason to fear the clattering chitin and sharp mandibles of vermin; those who have had experience with the demon goddess Scolendra.

In the Hell that Scolendra hails from, vermin dominate the world, and mammals, reptiles, and birds are crushed underfoot by monstrous bugs of unnatural size and ferocity. Her influence leads to the mutation of otherwise normal sized vermin, resulting in enormous mutants that hunger for the flesh of vertebrates.

Those who worship Scolendra believe that vermin are the true inheritors of Urth, and that humanity is not fit to walk the world. They pray and make blood sacrifices to their cruel goddess, hoping to be blessed with mutations that bring them closer to the creatures they revere.

In her home plane, Scolendra takes the form of an enormous centipede-like creature, with scythe-like limbs near her head that allow her to slice through flesh and bone with ease. Demons from her hideous realm appear as horrific conglomerations of chitinous flesh, resembling absurd hybrids of various insects, arachnids, and other vermin. 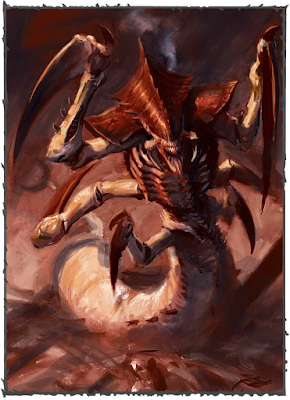 (The Raveners from Warhammer 40k somewhat resemble Scolendra, if smaller and with no legs)

To generate a Scolendran demon, roll 3d6, with each die rolling on one of the following three d6 tables, and then combine the 3 bugs together in some creative way.


For example, if one rolled a 2, a 3, and 4, we get a demon that is a mix of crab, beetle, and lobster. I'd interpret this by saying the creature has one small claw and one large claw, a shiny black carapace, 10 segmented legs, and a long armored tail ending in a fin.

Similarly, one could use the tables above to determine what verminous traits a mutated Scolendran cultist takes on, rolling 1d3 for the table to roll on, and then rolling 1d6 after that.