The Continuing Tales Of Grumbus The Bardbarian 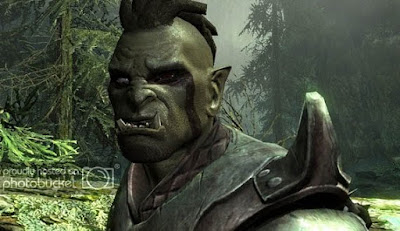 (A general idea of what our hero looks like)

Last time (which I will elaborate on in more detail at some point), Grumbus met some spider-people and briefly worked with a member of the Church. Of course, he ended up romancing the spider-folk, and taking them home with him to his haunted house.

At the House on Hell Road, Grumbus and his harem are chilling when the town crier announces that there have been strange reports of tappings and creatures in the local mine. Taking Olaf the Ogre and Henry the Spider person, Grumbus heads to the mine to talk with the mustachioed Mr. Howard Waites, the foreman. After talking with him for a while, Mr. Waites offers Grumbus 125 coins to discover the truth of the matter, either proving that there are no creatures or slaying them.

After descending into the mine, Grumbus finds a lantern with dried blood on it. Licking it, he finds it is not human. Grumbus follows some faint giggling and tapping, and the ceiling falls down atop the trio. Henry is wounded, but the orc and the ogre are unscathed. Grumbus rips off his shirt to serve as a temporary bandage for the bleeding Henry. They press onwards, finding a room with a repeating message of "Leave this place surface dwellers" and icy hand prints appearing on the wall. Finding sorcerous runes nearby, Grumbus chucks a rock at them, deactivating the illusion before he goes even deeper.

Eventually the mine gives way to a cave, filled with stalactites and stalagmites. After ripping a stalactite off the ceiling to use as a club, Grumbus catches sight of a strange pale humanoid by the torchlight, and shouts "Who are you?" in a booming deep voice. In response, the bardbarian gets a rock to the forehead.  Grumbus asks for them to tell him what is going on before 8 figures emerge from the darkness.

A group of kobolds attack the party, and Grumbus instantly kills one and rips its arm off, taking a bite out of it in front of the others, before asking again what is going on. The kobolds hesitantly explain that the humans are stealing the "precious stones of the earth mother". After trying to offer the kobolds some gems in exchange for not bothering the miners, a kobold tries to attack once more, being felled in a single blow by Grumbus's new club. The kobolds retreat for the moment, and the trio head up back the mineshaft, attempting to cause an artificial cave in to seal off the cave. Upon doing so successfully, they hear frantic tapping from the other side. Grumbus shouts at the kobolds to stop or he will kill them, but gets only laughter in response. Enraged, Grumbus, Olaf, and Henry burst through their makeshift stone wall, kool-aid man style, and viciously murder 3 kobolds before the remaining 3 retreat into the darkness, soiling their loinclothes. Grumbus pisses on the rubble to assert dominance, and heads back up to the surface. Once there, Grumbus shows the corpses of the kobolds and demands 150 coins, holding up a kobold's severed arm with a bite taken out of it as a threat. He gets the money he asked for, and returns home to care for his boyfriends.