You hear scuffling and a metallic-sounding wail from behind you. Your comrade grunts, moving as quickly as he can with a shattered left leg. Suddenly, he trips, falling to the floor with a thud. He calls out to you to help him up, to save him from them, and you glance behind you. Dozens of them emerge from the darkness, their glassy eyes and unnaturally smooth skin reflecting eerily in the light of your torch. Before you can let out a scream, they are upon your fallen friend, battering him with their closed, chubby fists until he is nothing more than a pile of bloody flesh. You try to run, but one of them shrieks so loud that you drop your torch involuntarily and fall to the ground, clutching your bleeding ears. In the cacophony, one thought enters your mind; you never want to see a baby ever again. 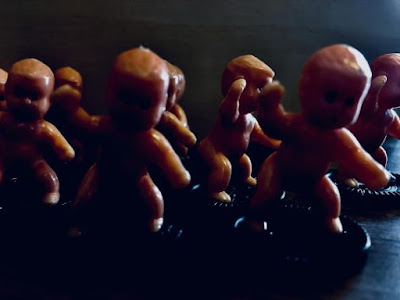 Long ago, there was a wizard. This wizard desired a child, but unfortunately he was impotent due to years of meddling with strange chemicals. It was clear that no conventional method of reproduction would be able to give him the children he desired, and so the magician turned to fouler means.

Using a porcelain doll, his own blood, and a mix of many other arcane ingredients, the wizard produced a child. But it wasn't what he was expecting. The doll was given life, yes, but its skin was smooth and hard, like the exoskeleton of an insect. Its eyes did not move nor blink, and its cries sounded as though an infant was crying through a metal tube. The worst was how it grew. The thing seemed to eat anything, stuffing anything it could into its ravenous maw, but no matter how long the wizard waited, it never grew into an adult. Eventually the thing was 5 feet tall, but still possessed the proportions and intelligence of an infant. However, this childish stupidity was combined with a murderous rage. The wizard was killed by his creation, and it fled out into the wilderness. Nobody knows how the things breed, but fortunately it seems to take a while, it can take years for a sizable colony to be established.

False Children like dark places, and as such can be found in caves, dungeons, and abandoned buildings.

False Children may release an earsplitting screech once per day, requiring anyone in earshot to make a saving throw or be paralyzed for 1d3 rounds.

Posted by Tristan Tanner at 2:59 PM