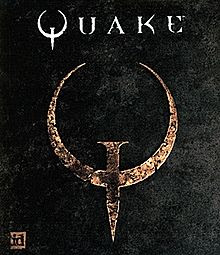 Quake, released in 1996 by Id software, was the spiritual successor to Doom and Doom 2. In it, the player controls the Ranger, a space marine who is sent through various slipgates (portals) into other realms to acquire runes, so that he can slay the mysterious entity known as Quake. In his travels, the Ranger fights his way through gothic castles, prehuman cities, futuristic research facilities, dungeons, and eventually finds himself in the lair of the being whose codename is Quake; Shub-Niggurath.

It was a weird game, but very fun, light on plot but heavy on atmosphere, with an ambient soundtrack by Trent Reznor providing an eerie mood to the game. An interesting feature of the game was that one could tackle its realms in any order they like, all of the portals that the Ranger had to travel through in his quest are open at the beginning of the game. Not quite a sandbox, but more open than games at the time.

In any event, it had a fun little collection of critters to blow into chunky bits, so I've converted them all into monsters for my homebrew ruleset, JABOM.

(Note that if you do the math these monsters don't fully match up statistically with their in game counterparts but I don't really care all that much.) 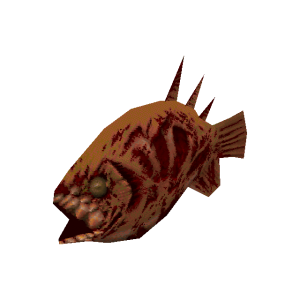 Rotfish are dog-sized, undead piranhas, with teeth like knives. They are not very dangerous alone, but in large groups they can easily overwhelm even a well armored adventurer. 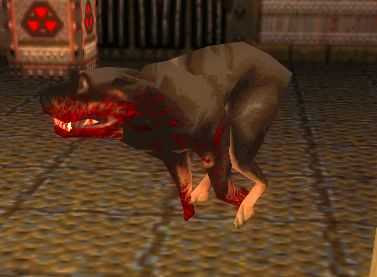 These are the corpses of dogs, possessed by extra-dimensional demons. They possess supernatural strength, and can leap great distances, but are easily slain. 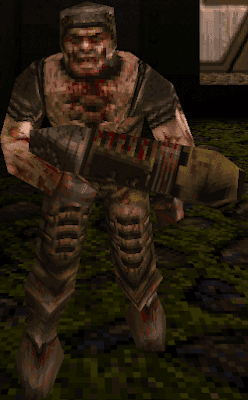 Grunts are a grotesque fusion of technology and magic, animated corpses with cybernetic enhancements that give them a burst of pleasure whenever they kill a living human being. They superficially resemble humans, though it is clear they have undergone extensive surgery in their brain and chests. 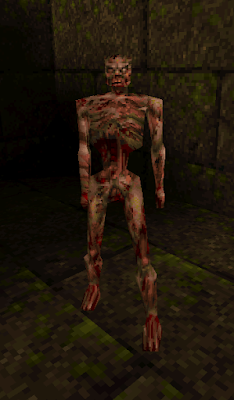 Rotting corpses given unnatural life through dark magic, these mindless creatures' only method of attack is ripping rotting chunks of their body off and hurling them at their foes. The foul sorcery saturating their body gifts these globs of flesh with potent stopping power, but the truly terrifying nature of zombies is revealed only after they are slain. 1d6 rounds after dying, zombies rise back up, with full hit points and all of their wounds sealed up. The only way to permanently destroy a zombie is to utterly dismember or destroy it, either by burning it, hacking its corpse to pieces, or blowing it up with explosives. 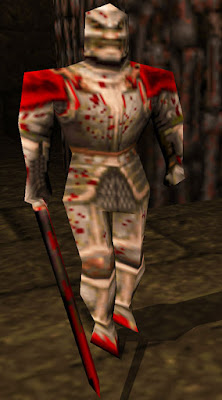 Nothing more than a suit of armor animated by rotting flesh, the knights are among the simplest of Shub-Niggurath's servants. 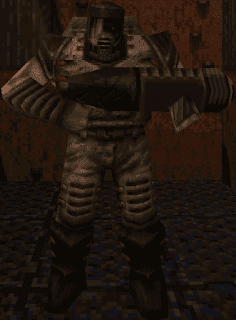 Essentially grunts with better equipment, the enforcers also have slightly more of their brain intact, allowing them better tactics and coordination. 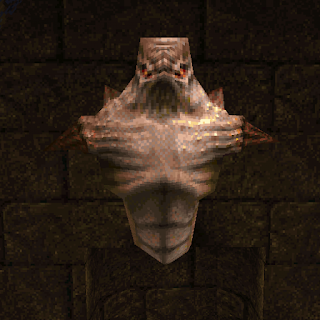 Scrags are demons that look like an unholy cross of human and cobra. They have a gas bag in their abdomen that allows them to glide through the air slowly, as well as allowing them to fire their spit at high velocities. 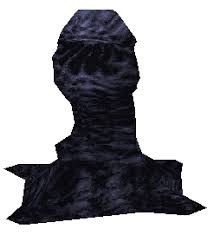 These bouncing blobs of protoplasmic black flesh are the children of Tsathoggua, a toad-like demonaic deity that dwells in blackest N'kai. For some reason they have fallen under the influence of Shub-Niggurath, and now serve her. They are incredibly fast, slamming into opponents with such force as to shatter bones. However, they are more deadly in death, as immediately after being reduced to 0 HP, they explode in a flash, requiring anyone nearby to make a saving throw or take 2d6 damage. 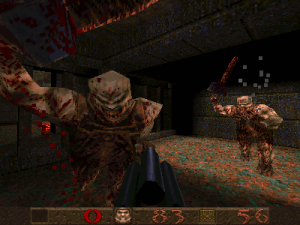 Ogres are 8 foot tall, cannibalistic humanoids. Their origins are unknown, but some believe that they are humans who have been tainted by foul magic, being turned into huge, bloodthirsty cannibals. They are given chainsaws and grenade launchers to slay their foes. If an ogre hits with its grenade, it deals 2d6 damage to the target, and a saving throw should be made for anyone close to the victim, otherwise they take 1d6 damage. If the grenade misses, it will land nearby, and detonate the next round, requiring anyone near it to make a saving throw or take 1d6 damage. 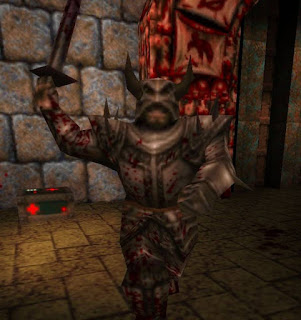 In life, these creatures were devoted servants of Shub-Niggurath, and made blood sacrifices to the witch-goddess on foul altars. They were rewarded with undeath, and transported to her Hellish realm to serve at her side for all eternity. A death knight may fire a spray of mystical energy in a cone in front of it, requiring anyone within 30 feet or so in front of the death knight to make a saving throw or take 1d6 damage. 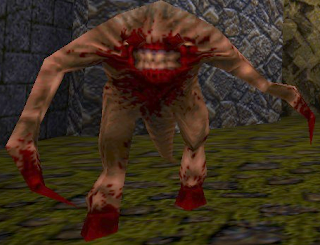 Fiends are horrific, simian creatures with sharp teeth, hooves, sharp claws, and no eyes. They are little more than mindless beasts, spurred into action by Shub-Niggurath's more intelligent servants. They are prone to attacking their own by mistake, as their bloodlust overwhelms their limited intelligence. 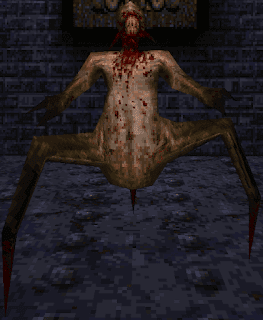 The Shalrath vaguely resembles a centaur, possessing a humanoid upper half, and a monstrous lower half, but the resemblance ends there. These creatures, despite their foul and primitive appearance, have a dangerous magical ability, and can launch orbs of unholy energy which will follow their target until they hit something, exploding in a burst of flame. Essentially, this means that if the Shalrath misses its attack, each round afterwards it gets to roll again to see if its previous attack hits, unless the energy ball strikes some other object. 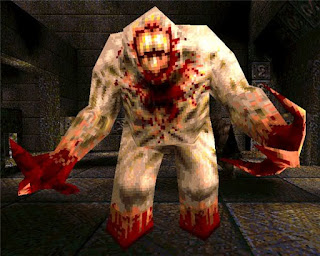 The shambler is a massive, shaggy beast that is often teleported by higher powers into other worlds. The beast exists only to feed and slay, as its bloodstained cavernous maw can attest. In addition to its powerful strength, the shambler can emit a burst of lightning from its claws, automatically dealing 1d6+2 damage to anyone within its line of "sight" (the beast is technically blind, but sees through some unknown process).
Posted by Tristan Tanner at 12:34 PM