Beneath the surface world is a land of nightmares and darkness, illuminated only by light of phosphorescent rocks and glowing fungi. The underworld is a vast network of tunnels and caverns, essentially forming an enormous, nigh-endless dungeon. The only creatures that live in this horrific place are horrifically mutated animals, troglodytes, goblins, and deep fae, and demons.

Troglodytes are what happened to the humans that the faeries captured when they were forced to flee beneath the ground. They escaped their faerie captors, but were unable to find a way out. Over the generations their eyes became tiny and nearly vestigial, their skin turned pale, and their teeth grew into sharp fangs like daggers. Now, these creatures scuttle about in the dark, reduced to mere animals. 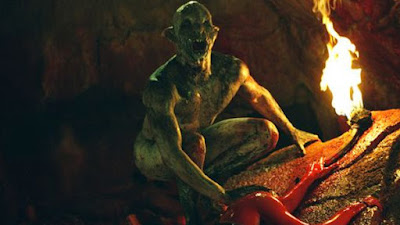 Goblins adapted well to underground life, their natural reproductive speed and ability to thrive in almost any environment allowed them to quickly become one of the dominant species of the underworld. Goblins are the most often encountered intelligent creatures of the underworld.

(From Lord of the Rings)

Deep Fae are the descendants of the faeries that were forced beneath the ground by humanity long ago. Though many faeries are already naturally small, the Deep Fae are stunted even by faerie standards, having adapted to their environment long ago. Despite their small height, unnaturally pale skin, and occasional eyelessness, the Deep Fae still maintain an air of otherworldly superiority and arrogance.

There are several colonies of demons that lurk in the darkness underneath the world. Some find their way to this plane by accident, and are unable to return, while others seek out Urth, viewing the lightless depths of its underworld as an ideal environment to live. Brain eaters, tentacled humanoids with immense psychic power, build alien cities in the dark places of the world, deeper even than the Deep Fae dare to go. Strange, slimy things splash and wriggle in vast subterranean seas, paying homage to unholy gods. It seems that the deeper one goes into the underworld's depths, the more likely one is to encounter demons, perhaps leading to the myth that Hell is at the center of Urth.

The Underworld can be roughly divided into 3 "zones"; the shallows, the deeps, and the abyss.

The shallows is often what connects up to particularly deep dungeons and a few cave systems. While still horrific, the creatures that dwell here are mostly just mutated versions of surface dwellers. Goblins lurk here, rarely coming to the surface to hunt and cause mayhem. Some troglodytes live in the shallows, but the majority lie deeper.

In the deeps, the light of day is but a distant memory. The is the realm of troglodytes and the Deep Fae, a land of strange, unearthly cities inhabited by beautiful yet repulsive faeries. Few who reach this far ever return.

Finally, there is the abyss. It is here the demons dwell, and things that should never be seen by mortal eyes dwell sleeping in black pits. The very tunnels seem alive, and the laws of physics are not always obeyed. The Deep Fae whisper that there is something terrible that lurks at the heart of the world, a being of pure and absolute evil. Nobody goes into the abyss unless absolutely necessary. 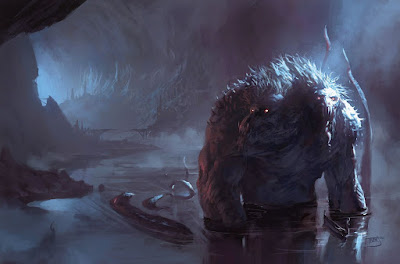 (From Rage of Demons)
Posted by Tristan Tanner at 12:58 PM