Here are some more dungeons made by other people!

I still have two more suggestions for dungeons left, so I'm gonna roll a d2 for it to determine which one I do!

D2
1. Matt: "I'm partial to Skaven"
2. matt (a different one): "An old witch's house, built on the edge of a cliff overlooking a cliffside beach. She's lived unnaturally long waiting for her man to return. ..and he just happens to look like one of the party members."

I got a 2, so it looks like it is witch time! If there is anything you want to see in the future, go ahead and suggest dungeon ideas in the comments below!

And if you take part in this challenge, feel free send me a link to your finished dungeon either on Chris McDowall's OSR discord server or in the comments of the post, and I'll put a link to it on my next post. 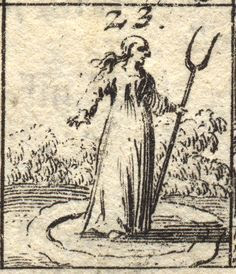 Hook
Up on the cliff, facing the sea, is an old house, rumored by many to be the home of a dangerous sorceress. However, legend also tells that there is gold to be found there, and the crying of a woman at night echo from the cliffside abode, making many believe that someone has been taken hostage by the foul spellcaster.

Background
Linda Hawthorne is a 300 year old witch, kept alive by a mix of dark magic and passionate love. Her husband, Johnathan Hawthorne, died in a shipwreck over 200 years ago, but Linda refuses to accept that, believing that he will eventually come back to her. She has become so lonely and desperate in these centuries that she has deluded herself, and the first man she sees instantly appears to her as the spitting image of Johnathan.

1. Mannequin Guardian (C)
A grotesque, wooden mannequin sits on a chair in the foyer.
The mannequin is animated by foul magic, and serves as a guardian of the house, attacking anyone who enters the foyer. However, it cannot leave this room.

2. Kitchen (E)
Flies buzz in your ears and the stench of rotting meat and vegetables fill your nostrils when you enter this disused, filthy kitchen.
Linda hasn't had to eat in decades, though she still occasionally feels hunger and tries to make a meal. She never cleans up though, so lost is she in her despair.

3. Library (E)
A large bookshelf takes up the majority of this room, piled high with moldering old tomes in disrepair.
Nearly all of the books have been eaten away by mold and bookworms. Those that remain are mostly useless, things like almanacs, dictionaries, etc. From the titles of the many decomposed volumes, however, it is clear that this was once a dangerous collection of occult grimoires.

4. Laboratory (S)
You see a large wooden worktable at the far wall, covered with vials, beakers, and pots. In the room's center is an iron cauldron.
If the players wish to experiment with the chemicals, in an attempt to make a potion, roll a d6. On a 6, they manage to manufacture a random potion. On a 2-5, the result is disgusting tasting, but useless. On a 1, they have created a deadly poison.

5. Illusory Floor (T)
The carpet that covers the floor of this hallway is remarkably well preserved, in comparison to the general decay of the house.
The carpet is not actually real, if one steps on it they will fall through a hole in the floor, down off of the cliff. Linda made this "carpet" because she couldn't be bothered to actually fix the floor.

6. Imps (C)
There are a few silver bird cages here, one of which is closed, containing the skeleton of an odd, monkey-like creature with bat wings and horns.
Some imps have escaped their cages due to Linda's neglect, and now lurk on the ceiling, clinging to it like geckos. They will attempt to kill all but one PC, before offering the survivor a chance to serve their demonic god, or be slain. The silver cages are quite valuable.

7. Laser Emitting Statuette (T)
The room is completely empty, except for a small golden statue of a nude, goat-headed humanoid in the room's center, resting on a stone pedestal.
The statuette is enchanted to fire lasers from its eyes at any who enter the room. If it is removed from the pedestal, its automatic fire is ended, and it can instead be used as a pistol-like laser weapon a few times per day, by pressing a button on its back.

8. Broken Magic Circle (E)
Drawn on the floor in white chock is a circle, decorated with arcane symbols and odd words written in a dead language. Parts of it have been wiped away.
If one studies the circle carefully, they may be able to figure out that it was used for scrying.

9. Giant Rats (C)
All seems eerily quiet in this room, its only decoration being some piles of rags on the floor. But suddenly, with a hideous squeak, enormous rats emerge from the shadows, frothing at the mouth in homicidal rage!
The rats are unaging, horrific monsters create after some normal rats drank from leftover potions in the laboratory. As a side effect, they are now also huge and filled with unearthly bloodlust.

10. Linda (N)
A bent, gnarled old woman lies sobbing in front of the painting of a handsome young man. She is dressed in rags, and seems impossibly ancient.
Linda will cry out in joy at the first person she sees, exclaiming that they are Johnathan, embracing them lovingly. She cannot be convinced that this person is not her lost love, and will believe anyone who tells her otherwise is trying to deceive her. If "Johnathan" attempts to convince her, she will believe he has somehow lost his memory. The painting of Johnathan is quite high quality, and in good condition; it can be sold for a pretty penny to the right buyer.
Posted by Tristan Tanner at 9:37 AM