Today's dungeon is based on a suggestion by Matt, who said "I'm partial to skaven".

But before that, here are some more wonderful dungeons made by the folks of the blogosphere! 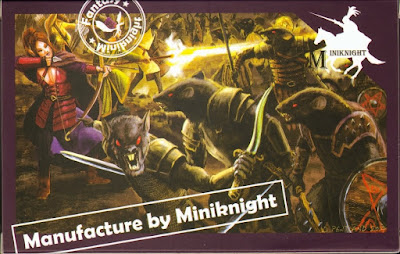 Hook
Throughout the city, there have been whispers of rats that walk like men, prowling in the sewers. A local urban explorer went looking for them, and while she didn't sight any of the creatures, she did discover a large rat-hole in the sewers, leading deeper down into the underworld. A local rat catcher, Janette, has gone missing, and her family is looking for her, she was last seen entering the sewers.

Background
The rat-folk are scouts for a subterranean empire of filth and decay. They have taken Janette as a prisoner in order to study humans and their culture.

1. Poison Gas (T)
The hole in the wall in front of you is large enough for a human being to walk through. A foul stench emits from it, reminding you of rotten eggs. Looking closely, it appears that the bricks were pushed out, rather than in, meaning that this hole was dug from the other side of the wall...
The entrance chamber of the rat-folk warren is full of poisonous gas, the rat-folk wear crude gas masks in order to walk through unscathed.

2. Bear Traps (T)
A shallow level of filthy water covers the floor, with bits of excrement and trash floating in it. The water is so disgusting and dirty that it is opaque.
Rusted bear traps lie beneath the surface of the water. Anyone who steps on one not only takes physical damage, but may contract a nasty infection as well.

3. Barrels (E)
This room seems to be a storage area of some kind, full of barrels which are made of some kind of deathly gray wood.
The barrels are full of supplies for the rat-folk scouts, including some salted meat, gunpowder, materials to mix cement, and medicine. The medicine in particular is quite valuable.

4. Rat-folk Guards (C)
Foul humanoid rats with matted fur and rusty armor stand across from you. One of them carries a small hooded lamp, and another is wearing odd, glowing green goggles. All have crossbows, which they are now aiming at you.
The rat-folk are not interested in discussion, nor do they speak the common tongue. They will seek to kill the intruders as soon as possible. The green goggles allow the user to see perfectly in the dark, albeit only in shades of green.

5. Treasure Hoard (E)
Glittering gold, silverware, and other metallic objects lie heaped in a pile here.
The rat-folk like to collect shiny things, and as a result have amassed the collection in this room. There are some genuinely expensive items here, but some is just junk.

6. Squabbling Rat-folk (C)
A group of the disgusting rat-folk appear to be arguing, chittering loudly and angrily.
The rat-folk are distracted, and off guard, but once alerted to the player characters' presence they will attack. They are arguing over who gets to have a shiny gold necklace, and one of the rat-folk is wearing it.

7. Dissection Room (E)
The stench of chemicals and death greets you as you enter this chamber. A metal table in the center of the room is covered with the corpses of dogs, cats, and even a person. Surgical implements hang from the far wall.
The rat-folk have been studying the surface's fauna, trying to find weaknesses they can exploit. A notebook written in the rat-folks' runic language can be found on the table, containing their findings.

8. The Horned Rat (C)
On a throne of bones and scrap metal sits a large rat-person, with curled horns protruding from his brow. Upon your entry, he points a finger at you and screams, causing a group of armored rat-folk to charge!
The horned rat is the leader of this expedition, a minor noble sent here mostly as punishment. He is cowardly, and if the going gets tough he will flee for the elevator in room 10, to escape back to the rat-folk empire.

9. Cages (N)
A half-dozen metal cages are the main feature of the room. 5 are empty, but in one, a middle aged woman is sleeping soundly.
The middle aged woman is Janette, the rat-catcher who went missing. Despite her situation, she is more pissed off than scared, and maintains a sarcastic sense of humor and a biting wit.

10. Elevator (S)
A rickety wood and steel elevator, powered by a steam driven engine, takes up the center of the room. You cannot see the bottom of the elevator shaft.
The elevator leads down to underworld, into the wild outskirts of the rat-folk empire.

Posted by Tristan Tanner at 5:33 PM